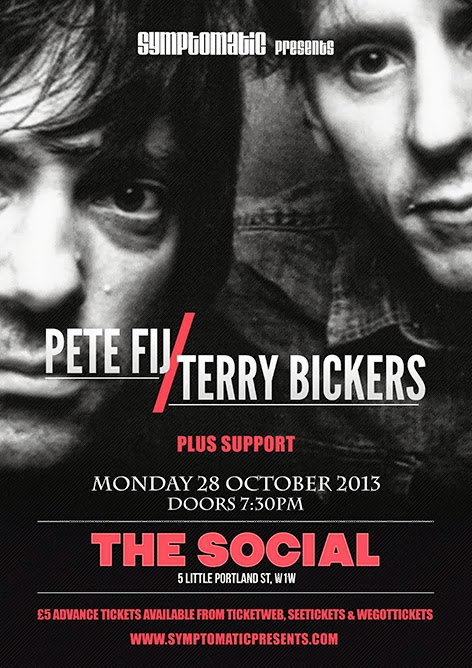 After soaring success with notable hits that scaled the UK indie music charts in the early 90s, Pete Fij (Adorable / Polak) and Terry Bickers (House of Love / Levitation) have teamed up to make what they call “sweet miserable music − like The Velvet Underground, Johnny Cash & The Everly Brothers all jamming at four in the morning, trying not to wake the neighbours up.”

With two singles released in the last year and a bit, many live performances and two recent sold-out live performances in Brighton, UK in September, the duo follow it all up this month in London, UK to launch their third single, “Downsizing,” at The Social (Oxford Circus, London), October 28.

Remember “Brit Pop” from the late 80s, early 90s music scene?  That was the term most North Americans used for the renewed British invasion of bands like The Verve, Oasis and Stone Roses over our college/university radio airwaves, at “alternative” dance bars, on cooler radio stations like Toronto’s CFNY in Canada, and stacked expensive in the “Imports” sections of local record shops. To the Brits, mind, this was just business as usual.

Whether accessible, or as coveted rarities beyond England, both Adorable and House of Love were unforgettable bands on the unforgettable Creation Records music label.

Tunes awash in atmospheric guitar-laden crescendos (when it wasn’t a glorious wall of reverb) while words swirled lush, romantic and heart-clenching thanks to evocative vocalists fronting each individual band. Each group emanated full, big sounds, making their love songs nothing less than epic.

Nothing is lost for quality, here, decades later in transition to this new group of Fij & Bickers. Time looks and sounds very good on these guys. For starters, Fij’s crackly, crooning voice reverberates as seductively as 20 years ago when he led Adorable and Polak. And, Bickers’ guitar magic resonates in lead as sonically spectacular as it ever did when he played in The House of Love, which carry on today (HOL play The Lexington in London, UK on November 12 & 13).

Fij & Bickers are a superior vintage that tastes just as wonderful as before but with a different flavour worth bragging about.

The three tracks leading up to the new band’s full album, Broken Heart Surgery set for release on Valentine’s Day 2014, steer clear from the seriousness in “Homeboy,” by Fij-led Adorable from the band’s 1993 Against Perfection album. Fij’s fusing with Bickers is a beautiful thing because the new music still captures those raw emotions that Adorable and The House of Love exposed for us to bleed on.

The sentiments are thankfully still about love and relationships, but the ‘dark’ here is refreshing black comedy.  Fij & Bickers are as cheeky in delivery as they are modest in being famous rockstars (at least in North America!), penning peculiar tracks that undoubtedly sprout from noticeable superstar roots.

A song like the duo’s languid and cheeky lines “I don’t give a shit about you, give a shit these days / Your memory never lingers / Except when I’m awake” in the aptly-titled track “I Don’t Give a Shit About You,” invites more of a laugh among your gang for raising another round in shared ‘been-there’ commemoration and group hug, instead of inducing a solitary, reflexive match with yourself and your black turtleneck, in a dark café, circa early 90s when House of Love’s “I Don’t Know Why I love You” had you tightening your fists in feelings.

The accessibility of the stripped-down tracks is the absence of shoegazer, and more a countrified quirky rejig of 60s love ballads channeling a Rolling Stones’ Exile on Mainstreet, unplugged. In other words, less screeching, jarring guitars climaxing to loud lush, orgasmic in a stadium setting, sure. Now, more listener-friendly crisp guitar slides, and caramel-rich acoustic warmth with just the right amount of twang to border alt-country, delightful for quainter cool clubs and boho bars with candles at tables. And lots of Jack Daniels.

Canadian music writer, Steve Baylin, comments, “One is first struck by the imposing elasticity of Fij’s voice: a measured, quivering baritone whose cracked, dramatic timbre recalls that of the enigmatic Scott Walker, capable of growling lows and the sweetest of highs.”

A similar oddball Scott Walker straight-upness in lyrics is evident, too. But Fij balances the quirk with purposeful poetry and the result is as entertaining in stories to hear as the duo’s videos are to see.

On the band’s second track and first video, “Betty Ford,” Fij, balls-deep with Bickers in a frigid sea, sings: “Love – I don’t mess with that stuff.” The hilarity ensues as he escalates the metaphor: “Hope is more addictive than coke / yea, it’s Cupid’s cruel joke / look at me laughing,” right before emitting a theatrical and gut-splitting howl upward at the moon.

Beyond the carefully crafted loose and fun-ness of the words, “there’s the visceral jangle of the songs,” says Baylin. “Much like the wistful Alex Chilton and the wry Robyn Hitchcock (circa Queen Elvis), the duo possess the oft rare ability to make the most delicate of musical gestures—a chiming strum here, slippery slide work there—feel emotionally grand.”

The clever wit of the songwriting pairs well again in a simple delivery, fitting for the latest single, “Downsizing”: “She had an audit of her life and something had to go / ‘It’s nothing personal’ she said, in the email that was sent / You could say I was surplus to requirement.”

Fij jokes: “It’s a song for the current climate of cutbacks—how the austerity measures in the economic world mirror those in some people’s private lives.”

The single comes with an accompanying video directed by Fij, made up of a selection of thousands of stills sent in by fans and by photographers he contacted specially for the project. That’s dedication, and thank goodness for us, while these musicians may no longer be committed to the lady in “Downsizing,” they are still faithful to us in turning out quality sonic-product contributions that we may buy up to diversify our music portfolios. May you invest faithfully, and responsibly, in their stock.

The new tracks are sure to remind you of how Fij & Bickers hit top of the British pop music charts once upon a time, and why their longevity is never an issue to a true music lover who knows her/his good stuff from the shit pile.

Find the special pre-release MP3 download of “Downsizing” on the band’s Bandcamp page as ‘Pay What You Want’.