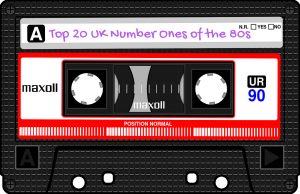 The 1980s then.  A decade often mocked until those who grew up in it found they were the first generation of bloggers and could now look back nostalgically and share their memories and ‘remember when…’ posts about when things were better, summers were longer and chocolate bars were bigger.

For the UK the decade brought about Thatcher, high unemployment, Thatcher, riots, Thatcher, the Falklands War, and the music at the start of the decade soundtracked this well.  The aftermath of punk had brought new possibilities and the chart had never been so varied.  Disco now rubbed shoulders with post-punk, new synthesizer-led pop and revivals of ska and rockabilly.  This is almost unimaginable if you take a look at today’s producer/collaborator-led Top 10 singles chart.

It wasn’t all great though.  As the 80s wore on, the once credible acts from the 70s aged badly and produced songs your mom liked.  Phil Collins, Rod Stewart, Paul Young, even David Bowie released bland stuff or Motown covers, many under the protective comfort blanket of their Band Aid involvement. Despite the growing popularity of music videos, creativity waned until the end of the decade when sampling and house music first dipped its toes in before treading water comfortably in the 90s.

It seems strange that Prince never got a UK number 1 in the 1980s.  Michael Jackson got fewer number ones than Shakin Stevens and naturally there were some shockers that topped the chart.  Novelty singles, revived oldies (“Reet Petite” took nearly 30 years to get to number one) and Paul McCartney’s “Pipes of Peace” are all wince inducing.

This list isn’t just about popularity or sales.  It’s about creativity and the time and place.  It won’t have John Lennon’s “Imagine” in it.  This may almost seem like blasphemy as surely if a song would go in the Greatest Number Ones of All Time (and probably rightly so) then why wouldn’t it be in a list for the 1980s? Well, my reasoning is that it didn’t even get Top 5 when originally released in the 1970s and while Lennon’s death was a key event of the decade, I’d say that Aneka’s “Japanese Boy” is a more essential and relevant number one from the same year (1981), and that hasn’t made it into the list either.  So there.

The video countdown is below….  Not a fan of video?  Try the Spotify Playlist version

20. The Pretenders – Brass in Pocket

Apt that this countdown begins with the first new number one of the 1980s.  “Brass in Pocket” was sexy without being overtly sexual.  Chrissie Hynde’s well thought out, catchy lyrics were perfect on top of that instantly recognisable guitar lick.  The Pretenders are an underrated singles band and had many other Top 10 hits but this was their first and last number one.

A high point in the musically duller mid-80s period.  It bridges the gap between early 80s synthpop and the Hit Factory singles of the late 80s (this was the first Stock Aitken and Waterman produced number one).  It launched the career of maverick Pete Burns who was always entertaining yet it’s unlikely that most could name or recall their follow up singles.  A song still essential for the dancefloor at your local 80s disco.

I mentioned in the introduction about Prince not having a number one.  Well this Prince cover got there via Chaka Khan.  It’s a feel-good pop classic with tight production ripe for sampling and remixing with the all-star lineup completed with Grandmaster Melle Mel’s rap and Stevie Wonder on harmonica.  It sounded quite forward thinking at the time and now sounds of its time without being overly dated.

Another song that sounded like it was from the future but now it sounds so 1988.  It sounds like it should be a banger with that chugging acid synthline and those orchestral hits but it’s a bit stop-start while the producers indulge themselves with the latest tricks.  It’s a more polished house number one than “Pump Up the Volume” or “Jack your body” from the previous year and the fact this was UK produced added to the excitement.

The intro to this song sounds like no other.  What sound like clanking pipes count the song in and the use of flute instead of the normal 80s sax means it has aged well.  It’s the sort of generic song that people are happy to admit to being ‘alright’.  Not many people dislike the song and yet do you know anybody who owns a Men At Work album?  The song that launched ‘chunder’ and ‘Veggiemite’ into the pop vernacular.

It was “Computer Love” that was released as a single from the 1981 album Computer World but it was the B-side, “The Model” that was played more by DJs and earned the German synth pioneers their only number one.  It’s the most pop Kraftwerk ever really got yet there is still an exotic otherness on top of that simplistic earworm of a synth melody   It was as if electronic music had come full circle, the masters rounding off the early 80s landscape they had inspired.

This song helped give electronic pop a kiss of life as the late 80s approached.  A fresh anthem, urban and suburban, slick with drama and yuppie-era frustrations.  There’s disco, soul and even rapping here but from the unlikely source of a white, former Smash Hits journalist now in his 30s.  Backed with an iconic, often copied (or spoofed) video the song won the Ivor Novello award.

While “Come on Eileen” is the go-to song for weddings and 80s nights, it was Dexy’s mark one that had the cool factor.  Bolshy brass-soaked attitude along with the maverick theatrical vocals of Kevin Rowland produced one of the best debut albums of all time.  “Geno” was a tribute to Geno Washington and it’s a song more recognisable for the intro rather than for any chorus and makes it quite an unusual but still deserving number one single.

1986 was where Madonna grew up.  Her early work displayed some naivety in the vocal even if the production was quality (see “Lucky Star”)  She sounds more assured here despite the predicament she finds herself in and shakes off that Monroe look with a sharper image.  The accomplished “Live to tell” had just missed out on the top spot earlier in the year, but “Papa don’t preach” went one better.

With the 90s approaching this was an uplifting soul tune that made you feel optimistic for the coming decade.  It stands apart from all the others in this list for as well as being the newest, it’s a song that still sounds fresh today.  You could hear it and not automatically link it to the 80s.  That midtempo funky beat was copied and probably over-used in the chart following this.

‘Ridicule is nothing to be scared of’ – Adam Ant’s maxim for the 80s generation stemmed from his own battle-hardened career of mixed success to date and several changes to line up and sound.  It had been a challenge but here he was at the top of his game, despite the song mirroring his increasingly panto style.

The Jam had an impressive run of singles from 1979 to 1982 and while you could argue other number ones like  “Start” and “Beat Surrender” were better songs, “Going Underground” was the better single.  An undeniable classic, it went straight in at number one which was a rare feat in those days.  It’s a non-stop edge of the seat journey with not a moment wasted.  Strangely it was going to be a B side to “Dreams of Children” yet it became a double A side with “Going Underground” the most played, and now probably the most famous Jam song.

A song that perfectly sums up the 80s despite it not having happened yet.  A hint of nostalgia (looking back at Major Tom) with some forward thinking (the song predicts the New Romantic era).  A video featuring Pierrot, a blacked out sky and a bulldozer on a beach was strangely iconic and it’s nice that the last Bowie number one mixes art, neuroses and pop in equal measure.  It came from Scary Monsters, the album that for a long time was thought to be Bowie’s last great work and it took some time for him to recover from his subsequent inferior 80s output.

This song put Michael Jackson, and the expectations of pop, into a whole new stratosphere.  The Thriller album was as massively scary (saleswise) as its video was supposed to be, an exercise in hype and marketing, but Jackson had the tunes and moves to back it up.  “Billie Jean” was the first single and it introduced some of the trademark vocal tricks that would later be easily parodied.   One of four platinum-selling UK singles from him in 1983, this was the only one to get to the top spot.

Another example of marketing success, Liverpool band FGTH (for short) were everywhere in 1984.  Three number ones, ‘Frankie say…’ t-shirts, and a massive futuristic sound.  Where early synthpop had enough flaws in it to detect human interaction, debut single “Relax” was sequenced to perfection, sounding like it was purely made by machines.  The song’s content caused a temporary Radio One ban due to its sexual nature which obviously only helped its climb up the charts.

The first and last time that a dandy highwayman would ever top the chart.  “Stand and Deliver” stampeded into your eardrums in a flurry of horse-hooves and a percussive swish of jousting swords.  While the singles from previous album Kings of the Wild Frontier have more credibility, this and “Prince Charming” ensured Adam Ant was the iconic face of the decade (at least until Boy George arrived the next year)

The biggest seller of 1981, it is often forgotten that this is a cover version of Gloria Jones’ Northern Soul stomper.  Despite the arguments that synthpop lacked soul and character, Soft Cell’s version fills in the gaps of the original with drama and atmosphere.  You know a song is a classic when you can identify a song within the first seconds and the iconic synth intro has  often been sampled since.  The 12″ version of the single contains one of the best examples of an early ‘club mix’ where the song blends seamlessly into the B-side (their cover of The Supremes’ “Where did our love go?”)

A song that can’t fail to lift the mood, where a Motown bassline and finger-clickin’ good rhythms act as a nice contrast to Paul Weller’s evocative social commentary.  It has all the best elements from “Going Underground” (above) but you can actually dance to this.

Abba had two number ones the same year (1980) but none of them could match this for pure, unbridled pop. Blondie took the Abba trick of having several choruses in one song, so much so it is constant euphoria.  The song mixes disco and new wave with a guitar hook that even trumps “Brass in Pocket” (number 20, above).  It’s the perfect pop single and the video made you believe the sound of the now was also the sound of the future.   ‘Oh… your hair is beautiful’

It is rare when a number one single reflects the mood of the nation.  “Ghost Town” sat at the top spot in the summer of 1981 amidst a backdrop of riots and rising unemployment.  The Specials were the perfect band to do this with their cool, mixed-race ‘unite don’t fight’ message, and “Ghost Town” was the perfect song.  The unsettling mix of eerie ghost/siren noises and cutting brass gave an added edge to song already brimming with acerbic frustration.  It’s a song well suited to the current political climate which only adds to its timeless factor.

So there you have it, the best 80s number ones in the UK.  Ask me again next week and I’ll have changed my mind.