Pop is a universal language and with lyrics not being much of an important factor these days it doesn’t matter if you know what they mean, English or not, right? 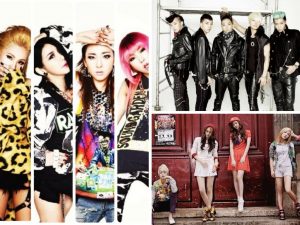 K-Pop has somewhat proved this to be the case, transcending into the mainstream in the last 10 years. However, it has become more Westernised in style recently, as well as adding sexiness to videos and image to appeal to a broader audience while annoying the purists.

Singer-songwriter/rapper CL has been struggling to break America for nearly 18 months now and her difficulty is a paradigm of the problems K-Pop has.  In becoming more accessible, the influence of K-Pop has waned and has blurred into generic pop.  She is just seen as a Korean pop star who sings in English and descriptions such as ‘the Korean Nicky Minaj’ do nothing to help her cause.

Yet, there were some great pop acts and songs in the pre-“Gangnam Style” days and beyond, so if you want to get a K-Pop fix, or try something new, here’s a mixture of cute, cheese and occasional edge….

I’d have preferred to include the Kylie-esque song “Eyeline” from After School but there is no official video for that sadly.  “Flashback” is still decent, kicking in immediately, and is a stomping glam number with a cheesy Euro-pop chorus.  The girl group are still going but with six members now (you can count eight of them in this video)

If you thought eight members in After School was strange then we have just the ten members in Exo, although they were created to be a band of two bands (!) so that singles could be released in Korean and Mandarin to crack different Far Eastern markets.  This is a video showcasing cool choreography and a laidback soulful RnB vibe with popcorn percussion.

This beautiful couple is Hyun-Seung (formerly of the boyband BEAST) and Hyuna (see number 6) who make up Trouble Maker.  Any video with leopard skin and red velvet gets my vote (and dancing girls of course) but as a song it’s a catchy number with a whistle hook and clever pop tricks.

Successful in Japan and Korea, BoA was one of the first solo stars tipped to ‘break America’ although that was more with an RnB style than the electronic-tinged pop of her newer peers.  Her first album was released back in 2000 and she isn’t even 30 yet!  “Game” shows an attitude within the verses and a delicate catchy chorus.

A perfect example of old K-Pop meets new K-Pop.  Her sexy Beyonce strutting and ass-shaking in this video was not in keeping with in the genre at the time yet the music was, despite a gritty, filthy bass breakdown at 2:20.  Cutesy harmonies and wacky backing get into your head even if you don’t want it to.

Probably too much autotune here from the (at the time) 11-piece boyband but if you’re wanting something a bit weirder and less conventional then check out their song “Gulliver”.  You can see why “Sorry Sorry” is their biggest hit as it is repetitive and simple without becoming annoying.

This is a timeless K-POP classic, in fact it is just purely a pop classic with an infectious vibe from the perspective of a girl being in love.  It captures that innocent giddy feeling, and the video compliments that energy and excitement beautifully.  If you are not smiling during this song then come and see me afterwards.

There’s only one boyband in K-POP that you need to know about and that’s BigBang.  There’s only five members for a start, each with their own distinctive style and voice.  Several members have gone on to do solo material or in G Dragon’s case, become a fashion icon.   You could pick a handful of BigBang songs to go in a list like this but “Fantastic Baby” is helped by a big budget video with the band dressed in a futuristic style and the music is catchy pop with a disco synth edge.  Altogether now….’Boom shackalacka!’

Another act where you could pick a few great songs in a K-POP list but “Nu Abo” is particularly sublime.  Driving synth and bass throughout which is slightly unorthodox for a pop song but all the more better for it.  It gradually makes sense as it builds and the attitude in delivery is tempered with some excellent dance moves in the video.  I am particularly enamoured with the smooth ‘doing your make up’ swivel first seen on 1:05.  I am going to watch it again…

So, we’re back to where we started with CL (originally a member of 2NE1).  It’s hard to top this song, grabbing you from the beginning with electro pop wonderment and ‘Oh my God’ hooks.  Rat-a-tat-tat with attitude, it’s the sound of the future, it’s the sound of the now, yet it is over 5 years old.  The group’s currently on hiatus while CL is in America but if you want more pop attiude from the girls then check out “I love you” or for something different have a search for their acoustic versions with Korean guitarist Jung Sungha.

Written By
Paul Davies
More from Paul Davies
Last week saw the release of Love is the Key to the...
Read More