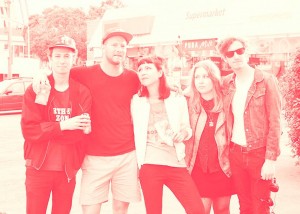 When it comes to music, the best songs will be able to take you on a true adventure without leaving your seat. For the solo/five piece band Teeth & Tongue (lead by Jess Cornelius) the single, “Cupcake” took her on an international affair. For the past two months, Jess has been at the Nes Artist Residency in Iceland working on new material but while there she stumbled back upon “Cupcake”, which had previously been recorded in her home of Melbourne.

“The recording needed vocals and a few extra bits, but by that point I was in Skagaströnd surrounded by miles of ice and snow, and my shared concrete work space wasn’t really appropriate for recording. I did a call-out to the Icelandic villagers for foam and cardboard, and managed to build a really ugly-looking vocal booth, then took over the residency assistant’s office for a few days to track the vocals and synths. Jade recorded her backing vocals at home in Melbourne and sent them to me in Skagastrond, and I sent the whole lot back to Melbourne to Gareth Parton for mixing”.

What would come back would be a very 90s alternative pop-influenced track. The song highlights her guitar talents (girls can rock out too!) along with very rich vocals that made “Cupcake” one of those songs that you could drive down the freeway with the windows down on your own little adventure. Upon the first listen, you can see why they’re teaming up with Courtney Barnett for her Australian tour.

Speaking of adventure, released with the single is a very gorgeous video. Who says you can’t make magic when you’re going DIY? Shot while working at the NES in Iceland through car and bus windows while driving around North Iceland, in Skagaströnd and at the residency.

“I met a Canadian graphic novelist there, and she’d taken some similar footage, so we put it together and made projections of it. She set up her camera and filmed me with the projections against the wall of the studio one evening, with all the other artists doing their own work in the background as I mimed along. Then I sent a great pile of footage back to Sunny Leunig in Melbourne for editing”.

Simple projection with home movie style filters take us all on a tour of what it was like for Jess Cornelius while working on her new material in such a majestic landscape. The best part about the video with its simplicity it feels like you’re being shown a personal perspective through the artist’s eyes. You’re there on that adventure. It gives a whole new immersive quality, like you’re standing there in the studio with Jess in the arctic tundra… not that I’d like to freeze or anything. I could only imagine the experience.

Teeth & Tongue on the Web:

Written By
Serena Butler
More from Serena Butler
Scarlet Soho (vocalist James Knights and bass/synth-ist Scarlet) has been locked in the...
Read More