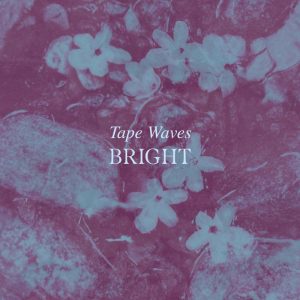 Bright, the new album from Charleston, SC duo Tape Waves has all the ingredients you’d expect from a dreampop release in early June.

“Tired” is an attention seeking opener with late 80s jangly guitar providing a dreamier Camera Obscura feel.  Follow up single “Invisible Lines” comes next, gentler in tone but no less stirring with its motorik beat keeping it ticking over.

The beats are more prominent that you might expect in places and the pounding backdrop to “Get Back” distracts away from what could have been a hypnotic drone.  When you hear the subliminal backing rhythm of “Reverse Rewind” later you can see how less can be more.

The songs stick to a pattern and the reversed guitar intros become a bit repetitive but it’s tried and tested and safe, the kind of dreampop you can take home to meet the parents.  It avoids being too formulaic though and in the second half, “Eventually” provides some welcome hooks and closer “Sundowning” is perfectly titled, a blissful coda for a warm evening that ends too soon.

While some dreampop can add an edge and discord, Tape Waves provide a sense of comfort and Bright acts as that much needed hug, the sound of once stolen summers now gratefully returned.

Bright is out now on Emotional Response

Written By
Paul Davies
More from Paul Davies
Experimental drone music can be powerful stuff. Despite its minimalism, its roots...
Read More