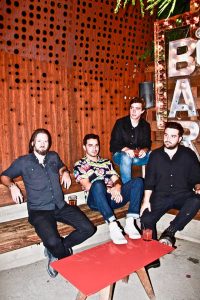 LA’s Swerve is taking us back to the best parts of the 90s with their new single “Lose Control,” which oozes of Gin Blossoms & Oasis remnants, and it’s refreshing. The 4-piece LA outfit has been making noise now for a year or so, making appearances at LA Weekly’s Chinatown Summer Nights and packing out storied Troubadour on Santa Monica Blvd. “Lose Control” will be featured on the band’s forthcoming EP Dumb Romeo, likely set for release later this spring. Vocalist Greg Mahdesian credits synergy as a band for bringing the new collection of songs together, saying it “allowed them to expand their sonic palette by being able to individually focus on their respective talents.”

Fans can catch Swerve playing regionally in Southern California in support of their forthcoming EP, and can expect more new music soon. Listen to “Lose Control” below, and be sure to keep up with Swerve on Facebook, Instagram, & Twitter.

Written By
Alex Rago
More from Alex Rago
NYC has always been a hotbed of soul, and Miranda Glory –...
Read More