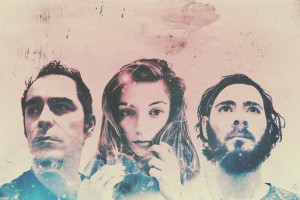 Galaxy EP is the latest bit of music recently released by Sun Glitters, the dreampop electronic project of Victor Ferreira, on which he has teamed up with Sarah P. ex singer of Keep Shelley in Athens.

The title song, “Galaxy”, is a pretty awesome serving of trance. It’s something you would hear at a hipster coffee house/bar in Seattle that would catch your ear and stick in your head for days. Now add to that this wicked cool remix by the French electro producer Alphaat and you have taken this gem to a higher plain.

The dreamy quality of Sarah P’s voice and otherworldly lyrics, mixed with the succulent music of Ferreira are blended with the grooviest of beats served up by Alphaat. It truly makes for a very intoxicating trance cocktail. This song hooks you from first listen. The more you play it, the more you’re consumed. It brings you to a headspace of beautiful color, peace and groove.

Sun Glitters will be touring in Europe April/May, and I sure hope there are plans to come to the states to do some festivals. Sometimes the Sun Glitters more than gold, it pours down every color of the rainbow.