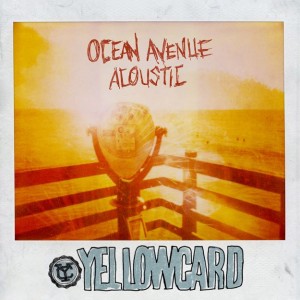 Yellowcard is one of those bands that has stood the test of time.  They are celebrating the 10th anniversary of the release of Ocean Avenue, the album that put them on the radar.  The band all agreed that they needed to pay special homage to this record but how?

Well there were special pre-order packages that included a white 7″ vinyl disc, lyrics handwritten by Ryan Key and a whole bunch of other goodies at http://moment.yellowcardrock.com/ but the biggest tributes to this milestone are the release on August 13th of an acoustic version of Ocean Avenue and then taking it on the road in the U.S., Europe and Australia.  In the U.S. and Europe they will play Ocean Avenue acoustically from start to finish.  In Europe they will be part of Warped Tour so they will play selections from the album.

Ocean Avenue Acoustic is the perfect thank you note to its parent.  There is just something about Yellowcard when their songs are stripped to the bone.  Sure, many bands and solo artists record and/or perform acoustically but these two guitars, that bass, the violin, drums and a great vocals together create something very unique.

To really appreciate this version, make sure to listen to the original.  One of the first things that hits the listener is the prominence of Sean’s violin on the acoustic tracks.  Although he and his instrument are one of the things that sets Yellowcard apart, sometimes it gets lost in the mix, especially in live performances.  On Ocean Avenue Acoustic the violin plays a leading role on many of the tracks.  The next thing is how LP takes the drums from the electric world to the acoustic ‘verse. Subdued where needed but the star of the show like in “Miles Apart” where they should be front and center.  Josh has no effects or pedals to make a statement but not necessary.  The bass lines are these great foundation stones that everything else is built on.  Ryan and Ryan do the same with guitars.  You don’t miss the electronic razzle dazzle.  Guitars and bass together provide this very rich texture to these recordings.

One of the real stand-outs is “View From Heaven”.This was supposed to be a “hoe-down” song from its inception. The electric version feels a little lost, but the acoustic version has you boot-stompin’ in a barn.  Another track worthy of note is the title song.  As their most successful single it started with a heavy bass line and led into the gritty alt rock song it was supposed to be.  However, “Ocean Avenue” has grown up with the band.  It’s had its really sharp edges sanded down a bit and has so much more to say instrumentally.  In fact Ocean Avenue Acoustic is the adult looking back its younger self.  With the new record people will want to sit down with a good craft beer and listen to the story the album tells rather than moshing with a bottle of mass produced brew.  Each version of this album has a message, is made up of very good music performed by truly talented artists and is outstanding in its own right.  One should own copies of both.

Yellowcard on the web: