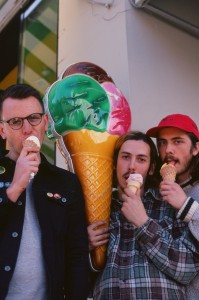 Hailing from Olympia, Washington and formed in 2012, Strange Wilds are Steven (Vocals/Guitar), Sean (Bass) and Allen (drums). For just three guys, they make one glorious racket.  No surnames were provided, I can only assume these were surrendered to the great post-hardcore gods in the sky in exchange for the hearts of banshees. A price worth paying for an album of such percussive power it resembles a forced abduction.

The group formed when Steven met Sean and they became friends. Several months later they formed a band called Wet, gigging around the West Coast as a four-piece. Allen was added as a full-time member in 2014 after a line-up change, and the band was renamed Strange Wilds. They released a 4-song EP and toured immediately. Sub Pop came calling, and snapped them up last year.

Their debut long player, Subjective Concepts, is a smash-and-grab supercollider of a record. Each song arrives noisily, pulling up in the driveway all engine revs and spraying shingle and leaves by kicking the door in and throwing it into the pond. The 11 songs here bleed with the hybrid DNA of Seattle’s past and future.

Right from the off the onslaught is unleashed. Opening shot “Pronoia” sets the marker for the rest of the album. Buzzsaw guitars burn all over thrumming bass and chaotic drums. Steven’s scream-speak vocals are primal. It’s a ferocious opening.

“Don’t Have To” is sleazy industrial rock recalling mid 90’s Marilyn Manson while “Egophilia” opens with a twanging bass line and blurred drum speed bursts that grab you and haul you along. “Oneirophobe” is a sinister, sneering track with disorientating tempo changes and a snarling chorus. “Lost and Found” kicks off with a Smells Like Teen Spirit-like riff, all very college radio until it swerves off in to layers of shock guitar riffs and throat-shredding vocals. Some songs blur their way through drone and dirge while others soar and speed along at breakneck pace.

Strange Wilds are all about riffs, rage and energy. It’s a seismic beating of epic proportions that leaves you staggering and blinking into the twilight. These guys essentially smash the place up and leave you with ringing ears, elevated heart rate and blurred vision.

They expertly combine the roar and swagger of the Pixies with the heavenly scuzz of Bleach-era Nirvana.

Once over, it is advisable to sit and contemplate what you have just heard and experienced while letting the charged air settle around you before venturing out and re-joining civilization.

Subjective Concepts is out July 24 on SubPop.

Written By
Mike Stanton
More from Mike Stanton
James Dean aka Lost Idol has been making electronic music for a...
Read More