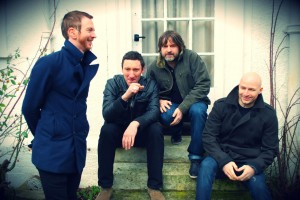 Sometimes I miss the old days of rock ‘n’ roll. You know, back when a bunch of guys just got together, had fun, and wailed it out on a guitar, drums banging out the beat as the whiskey-voiced lead singer belts out the bluesy lyrics. I long to hear the music that is guts and glory, the in-your-face rock and blues, Hendrix lighting his guitar on fire. If you know what I’m talking about, then long no more as today we bring you what you need in the music of the band Stellify.

Lead singer James Howlett’s vocals bring out the classic rock vibe in Stellify’s sound. Stunning acoustic guitar work adds to the vibe and the songs I have heard are extremely well crafted. Not bad for a band that formed just over a year ago and it only goes to show their true talent. Hailing from Southeast London, these guys could clearly rock it out at any of the Southern Rock festivals here in the US and hold their own against the best of them.

Having already released an EP entitled Exhale, the guys recently released their new single “The Rebel” which speaks clearly to being who you are unapologetically, something we at Fourculture believe in strongly. To hear it, one would think you were standing in front of the band at a gig and the video suits this feeling perfectly. The single release also includes an incredible cover of Bowie’s “Andy Warhol.”

So, if it’s straight up rock you crave, with a psychedelic lemon twist on the rim, check out Stellify! We can’t wait to see what these guys have in store next and be sure to watch for a feature interview with them in an upcoming issue of Fourculture Magazine!