There are musicians and then there are legends.  Steve Hunter is one of these legends.  This incredibly talented guitar player has been in the biz since the 70’s, playing for everyone from Lou Reed to Tracey Chapman and many in between.  If you have listened to music within the last forty years, it is almost a guarantee that you have heard the work of Steve Hunter.  Fourculture was honored to get to speak with Steve about his latest solo work, The Manhattan Blues Project and even a few anecdotes from his incredible history.

Steve, we are so very honored to feature you on fourculture.com.  You have quite a musical history, playing for the likes of Peter Gabriel, Alice Cooper, Lou Reed, and Bette Midler among many others.  With all of this history, is there one great moment that stands out above all the others in your career? Can you even narrow it down to one?

First of all thank you for having me. It is my pleasure. It is difficult to narrow that down, but if I had to pick just one, it would probably be playing guitar behind Tracy Chapman when she did a duet with Pavarotti. He had such a magnificent voice as we all know, but hearing it coming out of my stage monitors and blending so beautifully with Tracy’s voice was absolute bliss for me. And I got to stand right in front of the 80 piece orchestra. It was truly a magical moment…very moving. 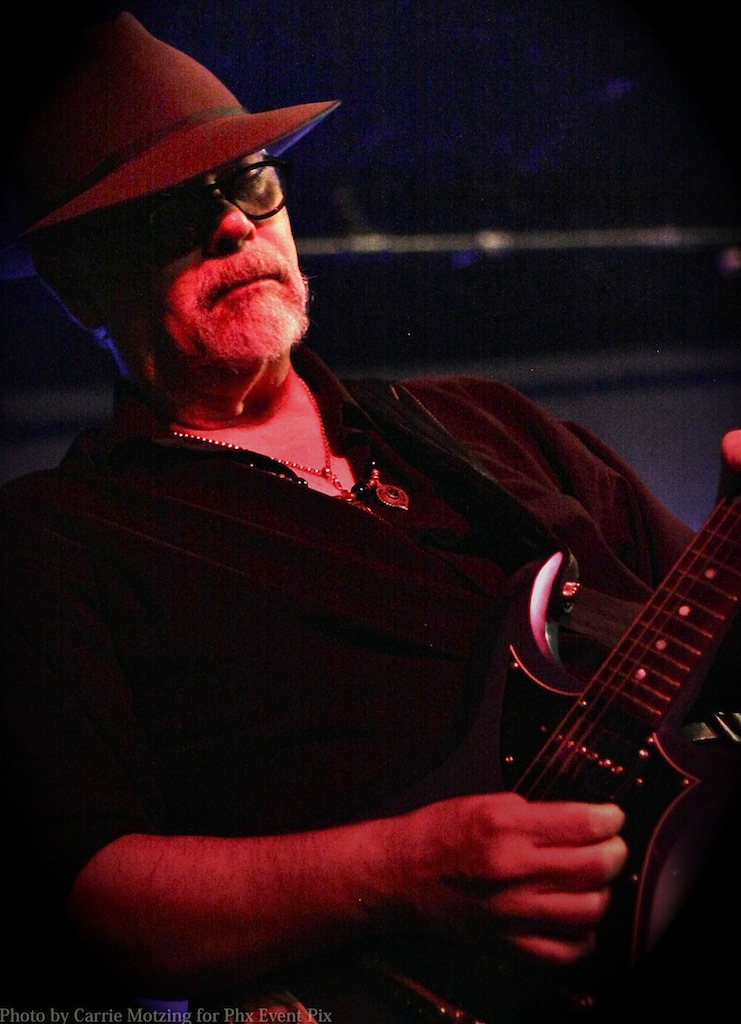 Your style is very laid back and melodic. How have you developed your style over the years?  What influences do you feel you’ve learned the most from?

Developing my style was a very slow process and I don’t think always a conscious one. I think it was more of an evolution. And influences change over time and sometimes, you aren’t even aware you are being influenced. To make that clearer, I generally listen to anything melodic…most often that would be a singer. There is nothing more powerful and moving than a black woman singing in a Gospel choir or singing the Blues. If I could get my guitar to sound like that and if I could play like that, I would be in complete and total bliss. When I first heard Aretha sing, I wanted my guitar to sound like that and I wanted to play like she sang. I still do. I’ve been working on that most of my career.

What was the best piece of musical advice anyone ever gave you?

I met BB King once at one of his shows and actually got to speak with him for a few moments. I told him I had been playing along with his records but, no matter how hard I tried or how much I practiced, I could not and did not sound like him. He said to me, ‘Learn from the records but don’t try to sound like me. Take the Blues and make it your own. That will keep it alive.’ That was a profound turning point in how I perceived playing guitar and my own playing in particular. Now when I learned those beautiful little phrases of his, I would play around with them myself and try to make them sound differently and do other things. It was very inspirational.

Your newest album, The Manhattan Blues Project, gives us a glimpse of New York that we may not have seen before. Why do you think so few people see the blues side of Manhattan and what gave you the inspiration to create an album celebrating it?

A friend of mine grabbed her camera on a fine clear blue-sky day in Manhattan, went outside and walked the streets, taking photos. She posted a few on Facebook. They were beautiful. One caught my eye. It was of a lovely sunset in Central Park, with the sun bouncing off the buildings in the background. All of a sudden an idea for a song began to hatch. Over the next couple of days I worked on the song and that’s how “Sunset in Central Park” came about. Then I started realizing that NYC had this wonderful Bluesy side to it that often goes unnoticed. New York is a very soulful city as we all have come to learn. It’s a city of energy for sure, but under that is this awesome soulfulness. I had seen it many times once I thought about it. So, that’s how the concept of the album came about. I wanted to create my own musical snapshots of that aspect of New York.

There are 2 cover songs on the album, “Solsbury Hill” and “What’s Going On”.  What was it about these 2 songs that drew you to cover them?  Why on this album?

“One of the things about ‘Solsbury Hill’ is that every time I heard that song, it reminded me of rehearsals for Peter Gabriel’s first solo tour. They were held in NYC. We were there for about 2 weeks and it was a blast. And since Tony Levin and I had played on the original I was so happy that Tony could play bass on my version for me. Also, the encore for Peter’s tour was a Genesis song called “Back in New York City.” It’s a pretty difficult song and it took me a while to get comfortable with it, but once I did it was very cool to play. That’s why “Solsbury Hill” is on the record…lots of good memories of NYC attached to it.

“What’s Going On” for me is probably one of the most perfect singles ever recorded…the writing, performance, arrangement and production; it’s perfect. I’ve always loved it. I know the song is basically about the war in Vietnam, but to me, that song always sounds like the streets of New York, especially in the 70s. The melody is a joy to play on guitar. And there was so much soul in Marvin Gaye’s performance that, translating that to guitar in a Bluesy way was totally natural. Hopefully, you can still hear New York in my version.

Each of the songs on the album really sets a tone and paints a melodic picture of the place that inspired it.  Did you pick which places you wanted to write for or did they pick themselves?

Sort of a little of each really. For instance, I knew I wanted to write something about the Dakota apartments, so a song began to form as I thought of that place and what had happened there. On the other hand, “A Night at the Waldorf” had actually been called something else and wasn’t quite finished. When I thought of Manhattan, and the fact that Karen and I actually had spent a night at the Waldorf, that title just seemed to fit the vibe of the song. I’m sure you’ve heard this before, but in many cases, at least with me, songs appear as gifts. I have no idea where they come from but sometimes I just sit and wait for them to show up. Sometimes they show up quicker than other times. But they usually do show up. And as a composer, I am always very grateful. It is the most exquisite experience. 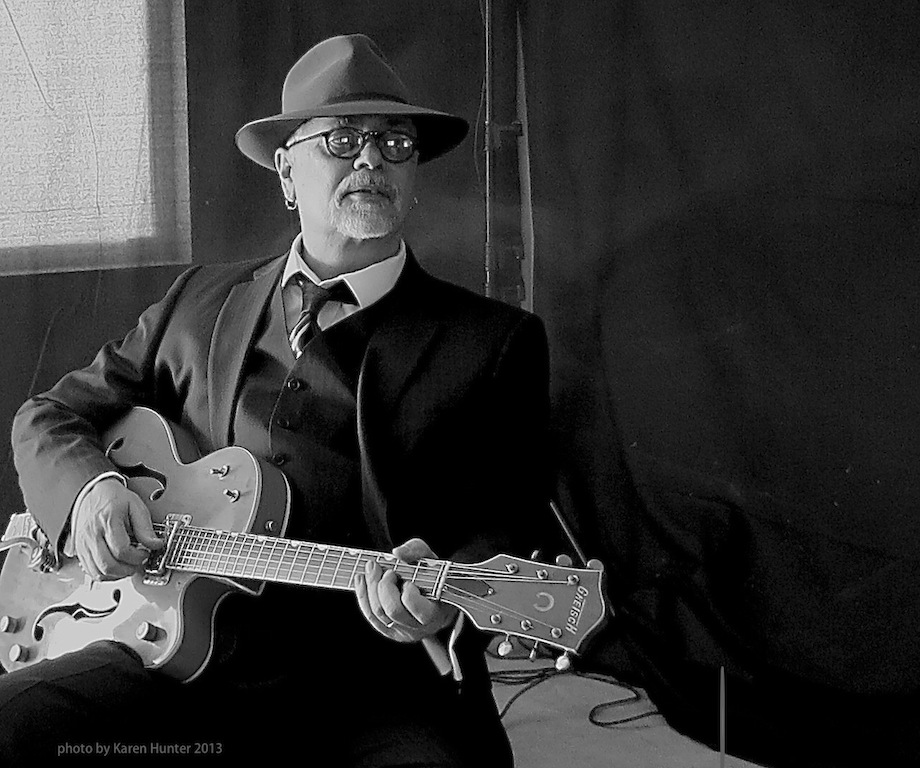 “Ground Zero” is an emotionally stunning piece and one of my favorites on the album.  What was the emotion like for you as you were writing that song?

“Ground Zero” is one of those songs that had another title and was not finished. I had never liked the original title…it was sort of a working title. Again, I wanted to write something about 9/11 but I wanted it to be completely different from other things I had heard.  I remember finding the demo for “Ground Zero” and after listening a few times that title came to me and seemed to fit perfectly. With that in mind it was easy to finish the song. And it was exactly the kind of vibe I wanted. It said perfectly what I wanted to say about 9/11. That was a very satisfying moment for me.

“Daydream by the Hudson” is a song on the album that you embellished and added to, but was originally a composition by your friend and guitar prodigy, Jason Becker who was struck several years ago with ALS. How does it feel to still be able to connect with your friend musically despite his illness?  What does Jason think of the song?

First of all, I was so pleased that Jason loved the piece. That meant a great deal to me. It was a beautiful little piece that was a joy to play with. You must understand that Jason is an extraordinary human being. I consider him one of my very best friends. Making music again with him was incredible but also very natural. ALS thankfully does not touch your creativity, just makes expressing it a little more difficult. But he finds ways and you cannot help but admire and love him for that. He is an incredible inspiration and all who know him always feel blessed as I do. I hope we can do more together in the future.

You got to work with several guests on the album including Joe Perry, Joe Satriani, Johnny Depp, Michael Lee Firkins, Phil Aaberg, the 2Cellos, Tony Levin, and Marty Friedman.  Do you enjoy the process of collaborating with others?  What’s it like to be able to work with this caliber of musicians?

I have always enjoyed collaborating with all kinds of musicians. It expands your own abilities and creativity and I’ve always learned something new. Playing and making music with these amazing musicians has been a wonderfully humbling experience. And they all helped enrich this album with their talents and have made it a much better record. I for sure feel blessed and honored to have all of them on my album.

Your wife, Karen, is also a contributor to your work in so many ways.  Is it truly a collaboration of kindred spirits?

Yes it is. I happen to be blessed with a wife who is also a musician in her own right and who understands the whole process and what it’s like being a musician. She is as much a part of this record as I am and that’s how it should be. We have done an album together of her songs and her singing called Empty Spaces and we intend to do more soon.”

Can we keep counting on new Steve Hunter music in the future?

Without a doubt! I have no intentions whatsoever of retiring. I hope to keep making music until I simply can’t do it anymore. As cliché as this might sound, it is my life. —Steve Hunter 2013

Find Steve Hunter on the web: