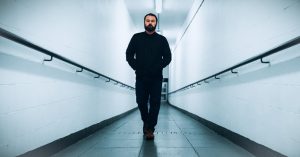 Tolstoy once said, “Music is the shorthand of emotion.”  Maddox Jones seems to take this sentiment to heart with his new solo EP, Headspace.  Having worked with and fronted many various bands and artists, Maddox Jones forges his own path in 2020 digging deep into his own emotion and vulnerability to create the landscape of this new solo work.  Headspace shows a different side to what Maddox can do, utilizing various styles and a lyrical depth that is incredibly insightful for all of us living this human experience.  Each song shares a different side but I dare you to find one that doesn’t speak directly to a piece of your own life.

Fourculture caught up with Maddox to get a deeper dive into the creation of Headspace and the inspiration behind each song.

Although you are no stranger to music, Headspace is your first solo EP.  What prompted you to create this EP at this time in your life?
I went into 2020 with a different kind of mindset really. I was newly single and everything just kinda felt different. I was in a bit of a rut with the music I was making and I felt like I wanted change. I began to start opening up to myself and really digging deep into how I felt and songs started flowing out of me. I quickly realized that I had a lot of things going on in my head and writing these songs was like therapy.

How did it feel to have complete control of what you wanted to go into this and how you wanted it embodied?
I never really plan too much in terms of the creative process. A good friend of mine once said to me “never be attached to an outcome when creating because you never know where a song might end up.” I collaborated with a few different producers on this record and each song has its own energy and vibe. The main thing I wanted to get across was to always be true to the way I originally wrote the song. It was a really fun record to make.

The songs feel very personal and relatable. It seems very authentic and almost like each tells a story of a moment in time that you are just streaming. Is this how you approached the making of the songs for this EP?
You are completely right here. The majority of the songs on the record were written at a piano in the corner of the living room at my parents’ house. It’s a really old piano that’s a little out of tune but that didn’t matter. It’s almost like I had an epiphany where I could just be myself in my music. Whereas In the past I would maybe write about fictitious events and try to make them relatable, now I write about exactly what I’m feeling at the time and it feels easier and more natural. Imagine that – less work for better results!

I really kind of want to dig into each song because they each seem to touch on a different part of one story. The title and opening track, “Headspace,” has a very meditative sound to the instrumentation.  Leave just the keyboard chord line and you could put that on a playlist in a spa somewhere.  How intentional was that background feeling of the song when it came down to putting it all together with melody and lyrics? Is meditation and taking care of that headspace something that you’re into?
Again, thank you for being so in tune with the song, you are really nailing these questions. So, “Headspace” was written at the time when I was starting to dabble in meditation. It was written at my friend Dave Crawford’s house who produces a lot of my stuff. We often drove over there on an evening to create. His house is in a little village called Clipston, just outside Northampton where I live. On this particular evening, I had no melody or lyrics to work on so I was going in blind. There’s a piano in the downstairs room of the studio and whilst Dave was grabbing some food I started to play the chords of “Headspace” and humming the melody to the chorus. It felt really good. Whilst I was forming the words to the chorus I heard Dave had gone upstairs to the control room and started making the beat. I was like whoa this sounds sick and instantly went upstairs and we started building the track from that synth line. The lyrics are almost like taking the listener on a journey of guided meditation. It’s a song about being there for someone when they are going through something hard. Listening back now and it really has healing qualities to it. The reaction to the song has been amazing. Such a simple song to create, it just flowed! As a writer, it’s important to enjoy those moments as there are always other times when it’s not so easy.

The song “My House” really had me thinking about some of the toxic patterns I’ve had in my own life. “Fuck it up, do it wrong, do it all over again.” It’s referencing a specific type of situation but, for me as a listener, it was really so much more far-reaching than that.  Did you mean for it to have that type of message or was it really just telling a story in time?
This one was written at my parents’ piano. I had the “let’s go back to my house” refrain at first. I didn’t really understand the song fully when I first started writing it. I write in “Flo-state” which is where your subconscious comes up with the lyrics and then your conscious kinda catches up later on. I love it when a song gets written and it’s like – the meaning behind this is amazing. It’s easy to get into that cycle of partying and doing drugs. Before you know it the addiction creeps up on you. This song recognizes that and shows a desire to change.

“More Than This” could be the song for a generation, and really for everyone during this whole weird year.  Was this a song you had written already or did this come in the wake of pandemic laziness?  What really keeps you striving for more?
More Than This was written around January time at my friend’s house whose artist name is Adal. This was during the time when I first had this desire to be honest with all of my lyrics. I remember writing the verse on guitar – “I’m bored, it’s late, I can’t sleep, so I’m scrolling my news feed.” We’ve all done that, well I know I have and still do. We live in a time where everything happens through a screen. We are glued to our smartphones. This song is taking a look back at my life and reminding myself of how I used to dream and not let that die. If you listen to the second verse lyrics it talks about my time in a new wave band when I had just left university. I love the lyrics to this song and they are different from how I usually write. Even writing this now in reflection is getting me inspired.

On the surface, “Dancing Feels Good” seems like just a feel-good song that we can dance around the kitchen to. When you really listen to it, there’s a real juxtaposition between the feel of the song and the lyrics which show some real vulnerability, anxiety, and maybe even fear of judgment. What was the process like of creating this piece that still feels good while remaining quite open and honest within it? Also, what’s your favorite dance move?
I wrote this song with my good friend Harry Tarlton who I met through my old project Born Stranger. He is a truly amazing producer and multi-instrumentalist. We had never met up and done a face to face studio session until this song. He had the use of a studio in Brixton for a few days and invited me down. On the walk to the studio, we talked about wanting to write a song with an uplifting feel in the chorus but with a darker depth in the verses. Harry started playing the chord sequence and getting the vibe to the track down and as he was doing that I started writing the lyrics. The meaning behind the song is wanting to be a better person and give up bad habits but also sometimes just giving in because it feels too good. If you notice the verses and pre-choruses are talking about seeing through the party lifestyle and having these revelations but then by the chorus you’re just like – but ‘dancing’ feels good. You know that feeling after a long week at work where you just want to escape and lose yourself. It’s easy to use drugs and alcohol as a means of escape. What I am trying to do now is find natural ways such as meditation to find release and relaxation.

“No More Ghosts” really digs into that place where you have to come to terms with loss and let it go. It’s beautiful and powerful and really resonates with a catharsis of sorts.  Can you tell us a bit more about this song? It’s probably my favorite of the EP.
“No More Ghosts” is the only song on the EP that wasn’t written in 2020 actually. I wrote it around March 2019 whilst watching an episode of the Netflix series ‘You’. The main character Joe Goldberg says “there’s no more ghosts in this bed” to signify that he had finally gotten over his ex. I loved the line and quietly hummed the first verse and chorus into voice notes on my phone. Instantly I knew it was great. I then sent the song to my writer friend Rob Cross who helped me write the second verse and middle 8 and then we recorded it and sent the demo to Harry Tarlton who produced it and made it sound the way it ended up. At the time the label loved it but it didn’t really work for my project at the time, Born Stranger, so we just kept hold of it until this year. I’m so glad we didn’t release it last year as it really suits me as a solo artist. Everything happens for a reason right. This is also my favorite song on the EP.

Overall, the EP really tells the story of a life in progress. What do you hope that people listening to the EP take away from it?
I want people to just feel like they get to know me and can relate to where I’m at. I write music to make sense of the things going on in my life and when other people connect with my story, that’s the reason I do it. Creating this ep has really helped me reconnect with myself as an artist and given a new sense of belief in myself.

What else can we expect from Maddox Jones?
Well, I’ve got a Headspace remix ep coming out shortly which also features a brand new song. I’ve also been working with Dave Crawford on my next ep. Basically, I’m about 3 steps ahead at the moment which feels amazing. I just want to be constantly releasing music and giving my take on the crazy times we are living and hopefully offering people a bit of hope along the way.

Lastly, we do something called “My Four.”  For you, what are four things you learned about yourself in creating this album?

Be sure to support Maddox Jones on his socials and check out the new EP, Headspace, out now!

Written By
Paula Frank
More from Paula Frank
I have found my album for the summer!  On January 10th Liverpool...
Read More