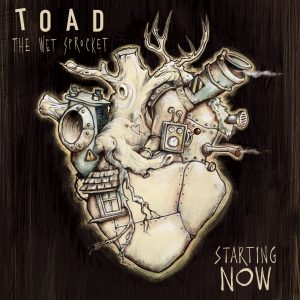 For more than thirty years the music of Toad the Wet Sprocket has been the soundtrack to my life. Their songs have been my warm blanket when I needed comfort, my vent when I needed to scream, my support when I needed a friend and felt like nobody understood, and my teacher when I need a reminder of who I want to be.  That’s a long time and a lot of life lived; growing into adulthood, marriage, births, deaths, cancer, job changes, joys, pains, and the uncertainties that come from life.  The music of Toad the Wet Sprocket has been with me through it all and I’d like to hope that I am a better person for it. Always working on that.

Ok….whew. Had to get that off my chest to focus!  Now that my blatant Toad lovefest is out of the way, let’s get to the good stuff! Today I am excited to bring you the new video for their latest single, “Starting Now”.  The new song, released last week, is the first single off of a new album they have continued to work on throughout this time with plans to release in the not too far off future.  The recording of “Starting Now” began before the craziness of this year but the band has continued to work on new songs and getting an album put together. Recorded, engineered, and produced by the band of Glen Phillips, Todd Nichols, and Dean Dinning in their own home studios, along with Mikal Blue who has worked with them on past releases, “Starting Now” is just the beginning of more to come.  Fans who have been following Glen Phillips’ livestreams during these past months have been treated to hearing some of the upcoming new material. It has been 7 years since their last album, New Constellation, and those same fans continue to love, encourage, and support this band that means so much to them.  That, in itself, speaks volumes.

“Starting Now” is the title track and is a song that brings hope to the uncertainty we all feel right now. Using the inspiration of the proverb that we don’t inherit the Earth from our ancestors; we borrow it from our children, “Starting Now” is a reminder that we are only stewards for the future. Above all, the words speak to not wallowing in the past and what we wish we could have done differently or better. We cannot live in regret of what has been done or what we were. Instead, we can start right where we are now to change both ourselves and the world around us.  A very powerful message indeed and one that is much needed for the times we find ourselves in. It calls each of us to “dig a little deeper, live a little kinder, and love a little sweeter.”

The video for “Starting Now” is a beautifully animated story that reflects the message of the song in incredible style. The video was created by their fellow singer/songwriter and friend, Antje Duvekot. (Sidenote: Please take the time to check her out as well.  Yet another AMAZING artist in so many ways.) Antje created the illustration and setting entirely from paper and cardboard and through the animation video we see this paper world go from bleak and lonely to a community working together creating a brighter place for themselves.  It sparks the hope that I think so many of us hold; the hope that we can put things aside and work together to create a world that is more beautiful, more responsible, and more loving.  This is the vision we not only want but need so much right now.

Please enjoy the new video from Toad the Wet Sprocket and take the time to reflect on what it means for you.  I ask you to ask yourself: “What can I do “starting now?” Then, let’s work together to do it.

Written By
Paula Frank
More from Paula Frank
Bitter Ruin is back with two new releases for your soul.  The...
Read More