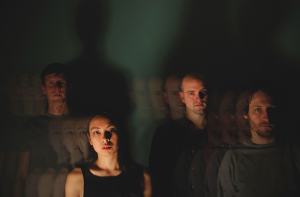 S/T is the debut album from Chicago-based outfit, Negative Scanner. They might come from a hometown which is known as the windy city, but as this album proves, there is no extraneous blowing on any of the tracks here. These songs are short, sharp and to the point. The longest cut on here clocks in at an almost leisurely 3:14 minutes compared to an average of 2 minutes for the rest of the album. This is old school post-punk at its most punchy.

If Siouxsie Sioux had formed The Fall as opposed to the Banshees it would have sounded something like this. Rebecca Valeriano-Flores’s vocal delivery has the same ‘off kilter’ tone but with a more ‘dangerous’ edge than her influential counterpart. This is set over the relentless driving rhythm of the band as a whole, which when it connects in the right way can leave you quite breathless. I would suggest that if you are one of those people that likes running distances while listening to music you had better leave this album in the locker… You will cover the ground quickly but will collapse exhausted over any distance as the pace never lets up.

The band dynamic is as a four piece. Rebecca on vocals/guitar, Tom Cassling on drums, Matt Revers on guitar and Nick Beaudoin on bass. Having the two guitars in the mix fleshes out the sound, providing the band with something a little different than most of their three piece contemporaries. Another hook point for me is the attitude on display on this album. Whether you like the music or not you cannot argue with the conviction and belief in what the band have achieved here. There is an ingrained intensity on every track which is admirable. It leaves me with a sneaking suspicion that they would certainly be worth seeking out live. I think it would be quite an intense and interesting show.

My one criticism of this album is that with all its relentless pace and attitude it can leave you a little flat all in one sitting. This sounds ridiculous for a collection of music that runs for no more than half an hour but is nevertheless true for this reviewer. The tracks always sounded refreshing and grabbed your attention when you dipped in and out of the album, but when played back to back the impact of that attitude can be dissipated somewhat. Either way this album is certainly worth your time. It might not be your bag musically but there is something going on here which for me is certainly worth checking out. [If only so you can imagine what an alternate reality version of the Albert Finney film Saturday Night And Sunday Morning would have been like if the theme music had been the track of the same name here].

S/T is out now

Written By
Mark Simpson
More from Mark Simpson
New Year. A celebration to bring in the new, by drinking enough...
Read More