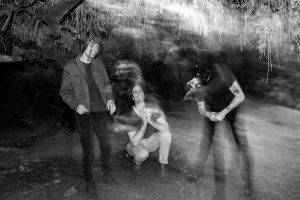 Seattle’s Spirit Award are gearing up for the release of their new album Muted Crowd, the follow-up to 2017’s Neverending. In advance of the album, the band has released their new official video for the single “Supreme Truth” – a weird, creepy depiction of cult-culture, very reminiscent of the recent Netflix documentary Wild, Wild Country. The song was inspired by a Japanese death cult led by Shoko Asahara, which enlisted the rich to join and carry out the subway sarin attack in 1995.

Spirit Award blends together the best parts of indie & psych rock – fans of King Gizzard & the Lizard Wizard, Omni, and Deerhunter will surely gravitate towards their sound.

The band will hit the road this October in support of the new album – tour dates can be found below. Be sure to keep up with Spirit Award on Facebook and Instagram.