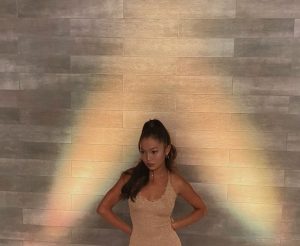 Sophia Bromberg may be a name you’re quickly becoming familiar with. She recently wrapped up Season 21 of NBC’s The Voice (team Ariana), and independently amassed nearly 200,000 streams on her debut single “lately.” Her latest offering is a powerful pop-soul ballad in the form of “Champions of Change” featuring hip-hop artist Oren Major. The track has been released in partnership with Footprint, a materials science technology company focused on eliminating single-use plastics. Fans of Adele and Ariana Grande will find their way to this one, as Bromberg showcases her entire dynamic vocal arsenal.

Sophia Bromberg grew up in a musical family, learning how to play piano, guitar, and sing at the age of 5. Most recently, she was a member of Team Ariana on Season 21 of The Voice. She released her debut single “lately” in 2021, which has amassed nearly 200,000 streams independently.

“We’re thrilled to be launching this beautiful new anthem to rally people around creating a healthier planet,” Footprint co-founder and CEO Troy Swope said. “Music is a powerful platform to convey the message that we’re running out of time and we need to do the right things to ensure a healthy future for generations to come.”

“Champions of Change” was first performed live by Sophia and Oren in front of a customer audience at the invitation-only Footprint Sustainability Summit in Phoenix, AZ in February. The duo collaborated on the song specifically to convey the health and planet impact being caused by single-use plastic in our food, water, and waste streams.

Keep an eye out for more new music from Sophia this year, and check out “Champions of Change” below.