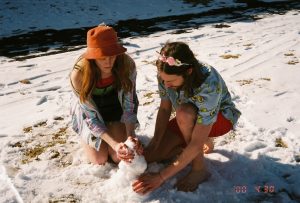 At Fourculture we like artists who take risks and Icelandic DIY-pop duo BSÍ have done just that, giving us two sides of themselves to explore on new album Sometimes depressed…but always antifascist.   Silla Thorarensen (drums & vocals) and Julius Pollux Rothlaender (bass guitar & toe-synths) have created an album of two halves, two respective soundtracks showcasing a different mood which may divide as well as captivate listeners.

Side one is a downbeat melancholic set of songs with sparse, heartfelt vignettes rich in synth textures.  Opener “My Lovely” appears simple and repetitive but despite this we are reminded that any song lamenting a past happiness resonates so much more in a COVID world.  The side continues with chorus-rich bass and a mix of lo-fi and spacey percussion, peaking with “Old Moon” with its chilled Lana Del Rey meets Cigarettes After Sex vibe.

The songs hint at a more anthemic direction but never quite go there.  The pulsing “TAL 11” still sparkles without an obvious shine and “Uncouple” appears more accessible at first but the chorus is a slow burner and it is actually the moodier second half that makes the impact.

In contrast, side two is the upbeat optimistic half hinting at a feminist revolution although the songs are not as stylistically cohesive as side one.  The expected raw anger is stifled by occasional summery quirkiness although “Feela það” provides more menace with a pitch bending backup to spoken vocals and “Dónakallalagið” is a welcome distorted stomp.

Naturally you’ll have a favourite side and this may be the problem.  I think you can be depressed and antifascist but for me, I am more drawn to the first side and wonder how often I’d flip to side two in the same sitting. You could look at it as two separate EPs to put on at different times to suit your current mood.

In both cases there’s a nagging feeling that the songs could push further to demand attention or to get a wider audience, but at the same time it’s almost as though BSÍ are deliberately holding back, not wanting to go with the obvious.  It’s bold and refreshing even if you end up only liking some of it.

Sometimes depressed…but always antifascist is released 21 May on Bandcamp.

Written By
Paul Davies
More from Paul Davies
Fourculture are delighted to bring you an exclusive premiere of the third...
Read More