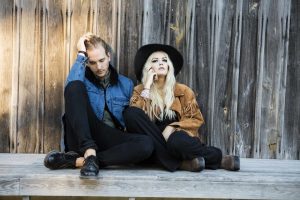 Sweden’s Smith & Thell enjoyed a productive 2016 with the release of their debut tracks “Statue” and “Row” – racking up over 3 million streams on Spotify collectively. The talented songwriting duo haven’t skipped a beat in 2017, and are immediately back with their massive-sounding track “February.” It’s a stripped down, ominous song about hands touching the remote control more often than their lover. Sounds uplifting, doesn’t it?

Despite the melancholy subject matter of the song, it does lift you up in a way. “Neither of us felt like seeing people,” the group explains. “The only thing we noticed was hollow- eyed people on the subway, walking into each other and stepping on each other’s feet.” One day Maria was laying on the couch and Victor was sitting at the piano, playing to himself. Suddenly from nowhere Maria started singing to the melancholic chords: ”I said to my hands, now go make some friends. You touch the remote more than your lover. But I’m as low as low can be. So I just stay home and watch TV (…) seems like nothing works on me this February.”

Written By
Alex Rago
More from Alex Rago
The name Shana Halligan may not look familiar to you upon first...
Read More