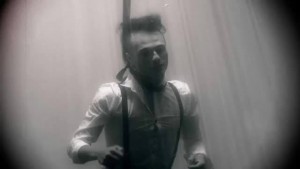 Depression and anxiety are two emotional statuses that many of us know too well. Sometimes it can feel that you’re just drowning in a sea of sorrow and darkness. Sometimes it feels like the world can’t understand what you’re going through. The dark emotions are depicted beautifully in the latest video by the alt-rock band Smashing Satellites called “Waterfall.”

Through a cinematic lens the lyrics of a negative relationship come to life. You watch the video of lead singer Sal Costa literally drowning in the depths of his own world. For those who have experienced this kind of darkness before, it is a great visual representation of what it feels to be broken inside due to someone else’s words. With the video using black and white for the drowned city gives this haunting aura and enhances the emotion that you hear through Sal’s voice. Then, you see the woman in red; something is up with her as she is the only stand out. As the video comes to an end you see Sal reach out to the woman in red but alas, he cannot reach her. “Waterfall” depicts a story that many have experienced before; both cinematic with its filters and immersive with the lyrical content.

Smashing Satellites has only added to their great video repertoire with this one. I for sure look forward to what visual masterpieces are to come.

“There are times in life where we all struggle with fear, depression and anxiety… we feel as though we are drowning. Sometimes it is not just about overcoming the fear and swimming to the surface but rather learning how to survive that time in the water.”  — Sal Costa

Written By
Serena Butler
More from Serena Butler
Scarlet Soho (vocalist James Knights and bass/synth-ist Scarlet) has been locked in the...
Read More