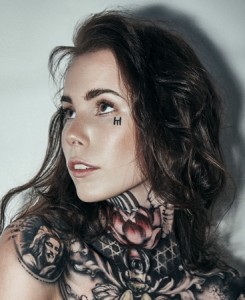 After the impressive “Porcelain” which was released earlier in the year, Skott has just followed up with “Wolf” and both tracks will make up a double sided 7″ vinyl release on Friday.

There’s an appropriate primal natural feel to “Wolf” which should be no surprise as Skott grew up in a remote small town forest commune run by ‘outcast’ folk musicians. The song has a subtle, downtempo feel compared to its predecessor which relied more on sassy production rather than focusing on the voice.  With “Wolf”, her cascading acrobatic vocals are at the forefront, with shades of the euphoric and the nocturnal, ever impressive but never showy.  Underneath this is delicate bass and piano pulses with a flourish of harp and strings to provide a cinematic, nostalgic edge.  It’s gloriously simple and holds together perfectly.

You can buy it here