Semi Precious Weapons new four-track EP Aviation drops on Tuesday, January 21.  The band has already introduced two singles; “Aviation High” and “Look To The Stars”.  They recently relocated from New York City to Los Angeles where they began collaborating with Grammy award-winning, multi-platinum, mega-hit maker “Tricky” Stewart (Beyoncé, Rihanna, Frank Ocean) on new material, before signing to his new RedZone Music label venture, RedZone Records. The band worked with Tricky writing and recording, for much of 2012 and 2013, before putting the finishing touches on what the band calls “the album they had always hoped to make.” An evolution of sound, Aviation seamlessly blends the band’s dance punk and future now rock approach with Tricky’s powerful pop and urban influenced production.

Frontman Justin Tranter took a few moments to answer questions for Fourculture about the record. 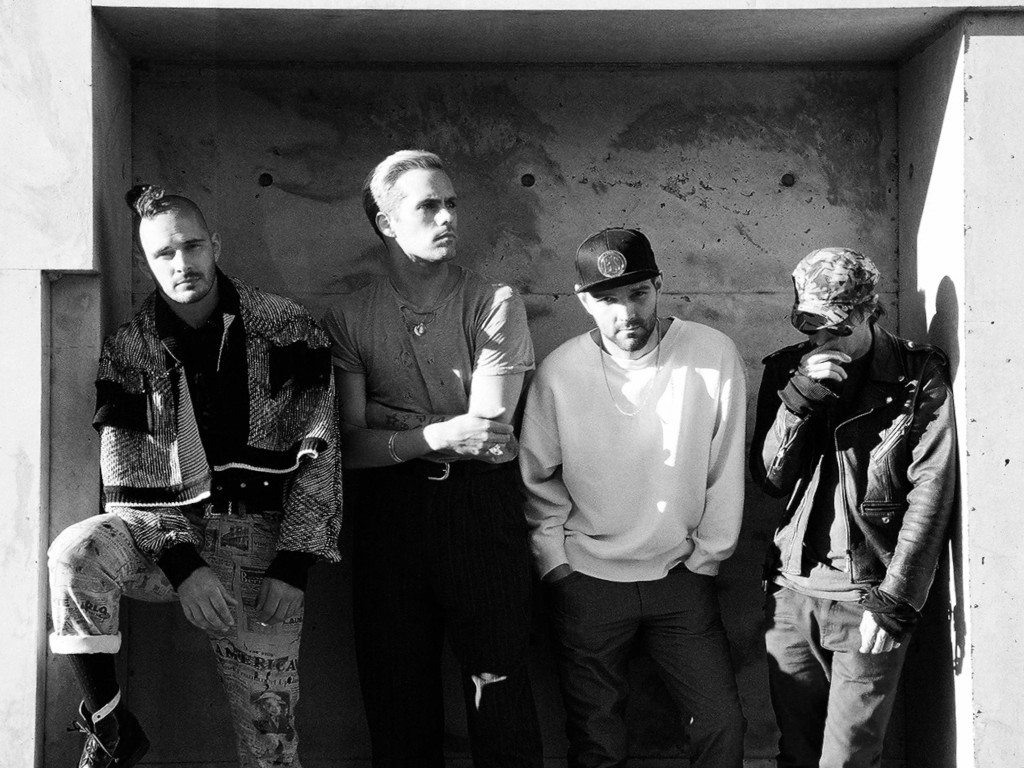 The two singles that the band has shared so far have very distinct personalities  One is very current pop and the other has a rock edge. Please talk a little about the band’s creative headspaces on these two tracks.

Our creative headspace for the whole album has just been to write the best songs we possibly can and have the sound and instrumentation reflect the story and vibe, song by song.

There’s also been a tease of the title of one more track, “Drink”.  Any hints on the feel of this track?

This song is a pretty aggressive break up song disguised as a guitar riff driven dance party.

With a four year gap since You Love You, what has been the growth/evolution of SPW?

Four fucking years. Nuts. Yes there has been a big growth/evolution. We live in a different city, we love different kinds of music, and we we’re lucky enough to tour the whole world since the last album. Everything sounds different and feels different. [SPW supported Lady Gaga on her year-and-a-half long “The Monster Ball” tour, Ke$ha’s summer “Warrior Tour”, headlining their own “Dirty Showbiz Tour” and performing at festivals from Lollapalooza to the Isle of Wight.]

Is “Aviation” the opening salvo of multiple releases that will result in a full album?

Yes, the four songs that come out this week are actually the first songs of the full album that is due out this spring (April).

What are the promo plans for the EP?

We have a new video coming out, “Aviation High” the song has started its long journey at Alternative radio, the standard press run, and some cool exclusive performances and videos for the interwebs

Can we expect to see SPW on tour again?

Hopefully some promo shows in March, and then proper touring in the summer. All we wanna do is get back on the road.

Pre-order Aviation, the 12-track album on iTunes and instantly download an advance four-song EP
that features the first single “Aviation High,” alongside album tracks
“Drink,” “Look to the Stars,” and “Never Going Home.”

Semi Precious Weapons on the web: