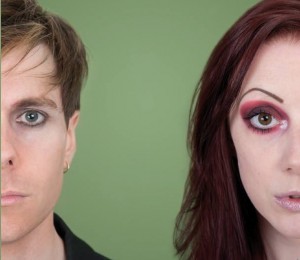 Comprised of vocalist James Knight and bassist/synth player Scarlet, Scarlet Soho have been making magic all across Europe for nearly 10 years. In 2004, the band released their debut album through UK indie label Human Recordings entitled Divisions of Decency. Quickly, the album would grab the attention of such acts Razorlight, Delays, and IAMX, all of whom would ask the band to join them on tour. In 2009, the band would release their second full length album entitled Warpaint. The band would then join 80s legends A Flock of Seagulls and Zoot Woman on tour throughout the UK and Europe. Since then the band has been releasing several EPs to get us all ready for In Cold Blood. After taking a few listens, I’m still not sure the world is ready for such pulse pounding pop!

What am I saying? This is something the world has been waiting for since 1983! In Cold Blood has this element that feels like its own heartbeat. The album; produced by James Yuill, Graham Laybourne (Boytronic/Falco), Zanzibar Production and the band themselves turns into its own living entity. With every beat becoming its own dancing heartbeat like in the track “Gigolo.”

The upbeat dance track “Gigolo” brings an energy that is purely club like in tempo and bound to be as infectious as their popular “Analogue Dialogue (Kill the Beat)” off of Warpaint. The lyrics tell the warning of a man who is up to no good. The song progresses into bridge the threat “you’d better keep your mouth shut and watch you don’t drown” clearly showing that if you do mess with him that your life may be in danger if you mess with the “Gigolo.” The dark 16-bit sound brings a fearful atmosphere around James’ lyrics which then seem to turn into a plea when you hear him say “Please listen to me!” The synth is a very dominate force in Scarlet Soho’s music in controlling the mood of the track. Yes, Scarlet indeed kicks ass in bringing her synth talent to the forefront with the instrumental “2015”.

It’s been a bit of a tradition to those familiar with Scarlet Soho’s past albums to have an instrumental. The track “2015” is like a score to an amazing 80s film in the vein of Miami Vice or Beverly Hills Cop even a more modern flick like Drive. If Hollywood needs a score to the new Ghostbusters or the next Tron they should call Scarlet Soho STAT. In Cold Blood is just full of surprises and one shouldn’t come into it expecting the same ol’ Scarlet Soho.

When you get into about six tracks in the album there is a track that stands out. It’s hard to explain it, a complete down tempo from what we’re used to hearing from the band. The song entitled “This Town Is Mine” is haunting and rich of orchestral melody. The song brings this positive element of never looking back to the horrible past and reaching towards what you want by owning the town. This bridge in particular has to be the best part on the album. A drum machine and trumpet … it’s like where the hell did this come from but it just fits so perfectly. In our upcoming interview the band discusses the making of the track and its one not to be missed!

The beats, the sounds, the complete passion thrown into the album is nothing like anything on the market now. The emotion throughout In Cold Blood is completely tangible. The beats will have you move. James’ vocals will have your heart pounding. Simply put, In Cold Blood isn’t just an album… it’s alive.

Written By
Serena Butler
More from Serena Butler
If you’ve read the latest issue of Fourculture you’ve noticed we have an in depth...
Read More