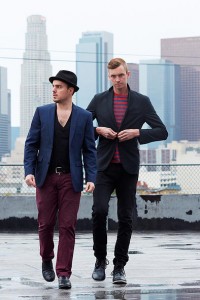 For electropop duo Say Say, comprised of Adam Reiter (vocals, guitar) and Jesse Gurtis (keyboard, back-up vocals), 2015 has already been quite a year. The band’s last single “Like an Animal” was featured on KROQ’s The Stryker “420” and resided in the top 5 of Kat Corbett’s “Locals Only” show for over 12 weeks. Today Los Angeles’ best kept secret is revealed as Say Say releases their debut EP entitled Prelude of A Dream.

Why hide something this perfect, LA?

Prelude to a Dream took me to a place of pure pop bliss. The EP started off with the track “Don’t Stop.” The song enters in with a very dreamlike melody, as if you’ll be taken to a very calm, serene, location…well, that isn’t about to happen as you’re suddenly hit in the face with some heavy synth. The song emulates the pulse of the one who doesn’t want it to stop. The tempo picks up in the chorus like a flood of positive endorphins; it’s as if the song becomes its own living being. The most unique part about “Don’t Stop” is the ska-like rhythm in the guitar. Who knew the magic of the two genres could make such a party atmosphere?

The party doesn’t stop with the second track and latest single called “Turn Back Time.” This song brings you right to an episode of Top of the Pops circa 1983 with its 80s synth-meets-europop influence The song covers a bit of a somber theme having the desire to change back to the problems of the past. For a song that reflects on all the negative aspects of relationships past, its upbeat direction is quite refreshing. It’s almost like you can look back on the positive memories of the relationship and reflect on a negative to grow from it. I’ve been saying for years… not all negative themes need a dark, melancholy melody to highlight what was already a heavy theme. It’s okay to dance the pain away!

The Prelude of a Dream party slows down with a darker track entitled “Running.” The melody reminds me of Lorde’s “Royals” but the immersive quality of the song is better. There is a chasing aspect to the song as the lyrics show this way to get your love back — “stop falling apart, because you’re running away with my heart.”  The lyric “breathe just breathe”  whispers in your ear…coaxing you back into the relationship like everything is going to be okay. A simplistic melody makes the lyrical emotions stand out.

Using the term electropop on its own to describe Say Say would be unfair as this entire EP is a sculpture of many genres lumped into one giant pop masterpiece. No wonder why Los Angeles has been hiding these guys for so long.  As soon as everyone hears this prelude, their dream of success won’t be far around the corner.