Long considered one of the most entertaining, sweaty live shows in the Pacific Northwest by fans and concertgoers, a Sassparilla live show consists of dancing, sing-along numbers, and plenty of good times.  Following 2012’s release of The Darndest Thing, with Magpie the band continues with an equally spellbinding recording, delivering a record that gives fans a collection of songs structured on the melodies and lyrics more so than the party groove and liveliness of their earlier recordings.

“I wrote the tunes more for myself this time than in other cases,” says front man Kevin Blackwell, comparing Magpie to the band’s previous releases.  “Our past records were genre pieces.  Magpie was written out of love for all the different kinds of music I enjoy.  When I was writing it, I was home with my brand new twin boys.  I’d have my iPod on shuffle or 70s pop Pandora.  I got a lot of inspiration that way.  There was no reason to not write a record that sounded like nine different bands, to write nine songs that fit nine different moods or experiences.” 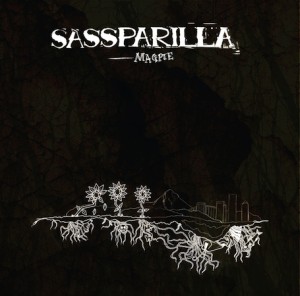 “Magpie is consistently Sassparilla because of the lyrical content.  The lyrics are still dark; I’m still singing about love lost, wandering souls, the regretful drunk.  Sassparilla songs are home to the downtrodden, lost, misplaced and angry souls. I don’t know why this happens,” discusses Blackwell.  “I am generally a good-natured, positive person.  But, when I write a tune I exorcise the stuff I try to keep down in the hole.”

One of the album’s highlights is the melancholic psych-folk of “Broke Down Engine,” a particularly bittersweet song for Blackwell.  Opening with the lines, “Just when you thought you had this thing licked, life comes at you sideways, you’re riding the rims.  Take a wide stance because this **** has kick.  The devil loves a broken heart.” “‘Broke Down Engine’ is the most emotional song for me on the record,” confesses Blackwell.  “I wrote this for a family of wonderful people who come to our shows.  Their son and friend passed away after a break-up.  The details are very personal.  He came to most of our shows as well.  We all connected to him and now we are connected to his family.”

After a listen to Magpie, it becomes clear that the lyrics are the ribbon that make the recording cohesive in spite of the different sonic experiences throughout the course of nine tracks and thirty-six minutes. Whether it’s album opener, “Threadbare,” which declares, “always in the wrong place, at the wrong time,” with it’s poppy, hook-laden melody, or the jangle-y roots of “Star,” which firmly and boldly notes, “just because they like it doesn’t mean it’s any good,” Sassparilla’s lyrics may at times come across as dark.  With a close listen, however, we hear declarations such as in “Star” when it later states “only time will tell if love is bigger than us,” suggesting that there may be a light at the end of the tunnel, a sign of hope for the downtrodden.

“The Mary Celeste,” with the poignant line, “you told me you can’t prove it’s real unless it bleeds, then you cut me into pieces and and saw that I was real,” uses history as a metaphor for relationships, discussing the tragedy of the Mary Celeste, which was found in the Atlantic Ocean on December 4, 1872, unmanned and seemingly abandoned, but still in seaworthy condition and still under sail heading toward the Strait of Gibraltar.

“I’m a liar and you’re a thief.  We’re in trouble. You’re fed-up and I’m a mess,” sings Blackwell on “The Mary Celeste.” “And, it makes me think about the Mary Celeste.  Did the captain give orders to abandon ship?” he continues.  “Did the fumes of the cargo make them all go insane?  Does it make you think about those nine lost souls, breakfast on the table, coffee getting cold.” In the same song Blackwell sings, “When I said I would take you as my wife, I always knew we’d stay together ’til the end of the time.  Now the devil’s in the details, the devil is in the room.  Do you remember how they said that we wouldn’t last?  That I didn’t know my head from ass?  Well, look who’s still together, look who’s left the room.”

Sprinkling stories of gloom and distress with glimpses of resolve and happiness, if only fleeting, Sassparilla’s lyrics give the listener tales of broken people and tragic circumstances, without ever giving up a glimmer of what good may later come your way. “Buick,” a song that would have been perfectly at home on The Darndest Thing, metaphorically compares fixing up the Buick and getting it back on the road to drive, proclaims, “I probably should quit my drinking, but I don’t believe I will.”  A song about repair and despair, it’s Sassparilla through and through, the darkness of the lyrics (“fly with the crows, you’re likely to get shot”) contrasts elegantly with the laid-back, melancholy, yet melodic folk-soul of Blackwell’s voice and the song’s soothing vibe.

Closing out with the blues-soaked “The Man Who Howled Wolf,” a tale of lost love, loneliness, and abandonment, Sassparilla closes out a thrilling, vibrant thirty-six minutes.  Each of the nine songs on the album offer an opportunity to become mesmerized by their separate and unique nuance, stylistic sound, and reachable characters that are found on every track.