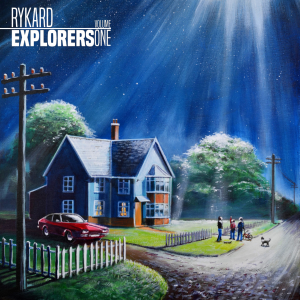 Once again Rykard has spun gold with his latest release. Explorers Volume One on Hunya Munya is the first in a series of four EPs and opener “The Explorers” has been teased, showing us a stunning arrangement of atmospheric, chilled-out electronica with delicate melodies and dimensional flurries.

Rykard has been creating ambient electronica from beneath the elephantine-grey skies of Lancashire for around ten years now, debuting with Arrive the Radio Beacon in 2010, which caused ripples across the globe with his blend of ambient atmospheric bliss. Luminosity followed in 2016, further cementing his reputation for creating expansive soundscapes while evolving his sound, infusing slow-chilled trip-hop beats, dub bass and shimmering synths to showcase a cleaner chillwave sound. 2018 saw his third studio album Night Towers released, incorporating elements of lo-fi dubstep, hip hop and trip hop throughout. Night Towers also hailed a return to the shadowy hypnagogic compositions of his 2010 debut.

Explorers Volume One consists of three tracks, opening with “The Explorers”, a lush and shimmering, laid-back trip of breakbeats and sinewy bass. Gossamer synths warp and sway, spiralling around atmospheric synth leads, giving the track its deep soul groove. This is music for headphones, music to lose yourself in, music to drift into the outer realms of cosmic electronics.

“Into The Nebula” continues this vibe, full of lush and deeply immersive swirling electronics and massive doses of aerial ambience. “Looks Real” glitters with rising melancholic melodies and subtly tugging beats that collide in an amorphous haze of noise. There are moments of melodrama amidst the heady layers of bliss and dense, blurred rays of synths.

Throughout Explorers Volume One, Rykard expertly weaves such dizzying atmospheres from richly diffuse electronics that the overall effect is overwhelming. Breathy keyboard pads are at the forefront resulting in a retro 80’s new age vibe that is utterly captivating.

Each track is washed with a Tangerine Dream-like meditative lull, swelling with cosmic wonder. Promo clips have been taken from the 1985 film Explorers and the music fits perfectly. There is the uplifting and euphoric pull of the soaring synths and shimmering melodies that set off pinging neurons and heady endorphin rushes.

The film concerns a young boy obsessed with 50’s sci-fi, whose recurring dream of a spaceship design is built by an inventor friend and they set off to explore the stars. It is a film of wish fulfillment, nostalgia and the innocent years of childhood. Rykard captures this perfectly on the first EP, all three tracks ache with wonder and longing.

There is a purity and emotional vulnerability throughout every track. Each stage of the journey is represented here and we are spun along on Rykard’s hazy rainbow of glittering ambience. Explorers Volume One is a beautiful trip into dream-infused nostalgia.

Written By
Mike Stanton
More from Mike Stanton
Lisa Masia and Marina Cristofalo moved from Sardinia to London in the...
Read More