In 1976, Ruth Denison took a trip to the high desert in Southern California. While camping near Pioneer Town, she rescued a family of baby opossums’ who were clinging to their mother who had ceased living. Compassionate to all creatures in suffering, Ruth had a very grounded view of right action and right thought. She did not stand for “bullshit” or sit with it for that matter. She was riding the waves of giants and she wanted for everyone to gain the capacity to see from this point of view.

That trip sowed the fateful seed that grew to become the Vipassana Meditation Retreat known as Dhamma Dena in Joshua Tree, Ca. Ruth Denison was among the very first western women authorized by  an Asian meditation master to teach. Her mentor, U Ba Khin, had a strong inclination to bring the  practice of Vipassana to the Western community. Spreading a discipline of mindfulness grounded in practicing awareness of one’s breath, body and thought as a means to access the ability to tranquilly observe one’s experience.

Ruth’s meditation teaches many things, but it particular, she taught people to understand or at least to acknowledge what they were experiencing within themselves. Rather than always looking away as our eyes are prone to do, Mindfulness is a practice of also turning the view inward. Learning to see inside as easily as we believe we see the outside. 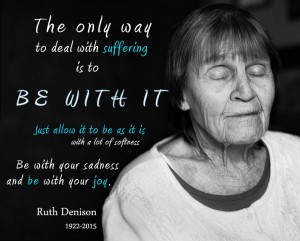 Born in Germany in 1922, then Ruth Schäfer, came of age during World War II and experienced the horrors of the war first hand. In 1957, she immigrated to the United States and found herself in Los Angeles, California in the midst what was fast becoming the flower power movement. Together with her husband Henry Denison who was of the Advaita Vedanta school of Hinduism, Ruth associated with many artists, intellectuals and Buddhist teachers who were looking for new forms of expression – a “new consciousness”. They frequently hosted luminaries in their home in the Hollywood hills, including Aldous and Laura Huxley, Alan Watts, Charlotte Selver, Timothy Leary, Ram Dass, Lama Govinda and Anaiis Nin among many others.

Ruth Denison passed away just last month at the age of 93. “The Silent Dance of Life”, the first feature length documentary on Ruth Denison, is currently crowd-funding. During the past four years, director and producer Aleksandra Kumorek accompanied Ruth at her center in the Mojave desert, capturing more than 100 hours of unique footage. The completed project will yield a remarkable portrait of one the unique women teachers of our time as well as an online-archive with many hours of exclusive videos and materials including Ruth Denison ́s formal and informal Dharma talks, ceremonies, rituals and guided meditations.

Please enjoy the trailer and support the project at Indiegogo.

Written By
Artist D
More from Artist D
Word has reached us that we have lost another gem of the...
Read More