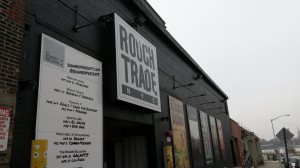 Rough Trade NYC overlooks New York City’s East River at the edge of the Williamsburg section of Brooklyn.  It’s not until  one sees the location that the shipping container motif of the store makes complete sense.  Upon entering the warehouse space, the world all comes together.

This record store opened in November of 2013  but had to close again due to noise problems.  Rough Trade is a complete complex that includes a live venue (working in conjunction with NYC indie concert promoters The Bowery Presents) which the neighbors apparently had an issue with.  The business spent much of the winter under renovation which manager Hope Silverman said was a bit frustrating.  The whole staff is looking at Record Store Day 2014 as kind of a ” Grand Re-opening”.  With Hope’s experience, they have at a great captain for the launch.  Her first experience working at a record store was in the shop that CBGB’s had on premises. Among others on her resumé, she also worked at one of the NYC Virgin Record Stores. 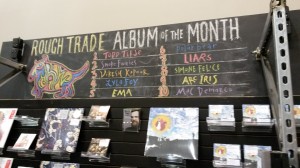 There was very little time to chat as Hope and her crew were busy unpacking and cataloging the piles of boxes filled with the special releases and Record Store Day merch that had arrived.  The listening corner had been turned into a staging area.  Asked if Rough Trade New York would benefit from any of the UK special releases as their parent company is based in London, Hope said probably not for RSD but they may get things sent to them in the near future.  The one thing they are getting thanks to their British “mom” is a live performance by The Rails.  What makes this super special is that the band is performing in the UK earlier in the day and then flying to New York for the second show the same day.

Rough Trade NYC is a completely immersive experience.  There’s a coffee counter, various places around the store to listen to recordings,  a ping-pong table and blackboards everywhere with recommendations and announcements.  They have a small selection of books and lots of RT merch.  It is relatively easy to get to via public transportation.  The subway and the buses stop on Bedford street and it’s about a quarter of a mile walk.  The surrounding neighborhood is definitely a community with a great personality with plenty of small eateries. With tons of music, live events, food and drink, there’s no other place like Rough Trade NYC.