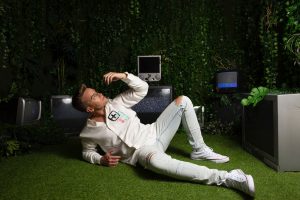 LA’s RIP Youth – the moniker of songwriter/producer James Maas – has shared his first single of 2022 in the form of “Midnight Hour”. It’s a provocative retro pop song with a funky, Nile Rogers-esque undertone – somewhere between the lines of Chromeo and Calvin Harris. “Midnight Hour” is all about the possibilities of the night.

“It’s about leaning into your freaky side,” says Maas on the song. “They say nothing good happens after midnight…I beg to differ.”

After beginning as a duo, RIP Youth transitioned to a solo act in 2021 with James Maas taking over the helm at lead vocals. The Australian-born artist has been championed by the likes of Idolator, Hollywood Life, Into Magazine, and many other notable outlets. He recently inked a deal with Radikal Records and plans to release more new music in 2022. In addition to releasing music, Maas was also recruited by Playboy to be part of their new CENTERFOLD platform, creative directed by none other than Cardi B.

Take a listen to “Midnight Hour” below and get the party started.