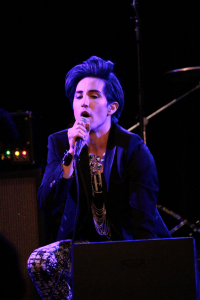 In this era of worsening pop music on corporately owned radio and disappearing music videos, especially ones that are well conceived and executed, it’s so refreshing to discover that these things are not completely non-existent.

26 year-old, L.A. native, Ricky Rebel, is another one of the great pop artists who is sitting just below the surface but definitely catching the attention of more listeners daily.  His latest single, “Geisha Dance” saw its video released on YouTube for Valentine’s Day and received nearly ten-thousand views in its first week.

This is already a great dance song with a bit of a dark edge. The “Geisha Dance” provides some cultural lessons about real geishas both in lyrics and the choreography of the video version.  Blending live performance elements with dojo scenes depicting the story and dance bit inserts, it is very well composed.  The direction and editing result in something that can soundly compete with anything else on MTV or Vevo even though it may not have had the budget of a major label act’s production.

Rebel takes a good voice, a talent for wordsmithing then mixes it up with some gender-bending, fetish and sensuality which makes for a concoction that is tangy, spicy, clever and fearless. If you go through his audio and video catalog, you’ll quickly see and hear why he gets the cold shoulder from the mainstream industry despite its own use of sexuality for marketing.  It’s just that “the biz” peddles its sex in a more culturally acceptable package.  There is so much great art and especially of the musical variety in the “queer nation” that is locked out because of “what about the children?”  The same industry that feeds Britney, Rhianna and Lady Gaga to 12 year olds.  Ricky Rebel stands among phenomenal pop artists such as Scissor Sisters, Gossip and advocate/superstar to the gay world, Kylie Minogue.  With a growing fanbase, he stands to join them in the growing audiences beyond the gay scene.

“Geisha Dance” should end up in your playlists, both audio and video.  Some may find the ending of the video a little shocking but if you taking it with the biting sense of humor that’s intended, it is the perfect ending.  You can purchase “Geisha Dance” on iTunes and Amazon.  Contact your local radio stations to request airplay.