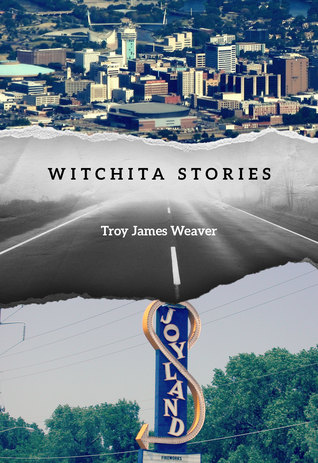 Troy James Weaver begins his collection of flash fiction/memoirs Witchita Stories with the dedication “for my brother.” But it could just as easily have been these lines from late in the book: “I/Love/You,/You/Fucker.” Over the next hundred-and-eighty pages Weaver goes skipping through his own childhood in Wichita, Kansas, tracing the shadowy presence of his brother self-destructing across the decades of his childhood, trying to find the line that separates them and yet still binds them together.

Weaver exists along the same axis as Ben Lerner or Sheila Heti, with a first person narrator who bears his own name and functionally identical experiences growing up. Weaver himself calls it fiction, but the truth is it doesn’t matter whether the collection is fiction or non. The essence of the collection is how it mimics memory, which is not the most reliable of witnesses. A little over half-way through the book Weaver even offers some quick revisions, admitting the mistakes in his own recollections but preserving the initial memory as being just as important as the facts of reality. Meanwhile the pieces skip around, dipping into this or that moment for only a page or two before jumping on to the next, driven by the hidden logic of Weaver’s subconscious as he chases the trail of his brother.

The longest of the pieces clocks in at four pages, most are under two. It’s a clever way to capture the fleeting sense of childhood memory, how we only remember the event and maybe a detail or two; the rest is our imagination filling in the rest of the descriptions, so that the picture feels full when it is anything but. And throughout are littered the ephemera of childhood: lists of Tori Amos songs, dumb jokes, noteworthy books, and photographs of Wichita. The photographs in particular are interesting, as they capture the in between places of the city, its underpasses and backyards and drainage pipes. These are locations that appeal to children precisely because they are unimportant and, therefore, unwatched. It is the tableaux of a hundred million childhoods.

Weaver writes like a friend telling you a story from his life over coffee, quickly and plainly. The emphasis is on the cumulative effect of all these micrometer slices of a life adding up over the two hundred pages. An obvious reference point is Boyhood, not just for the time-lapse effect but also for the interest in the quiet moments. These are the memories and stories that are important to Weaver not because of any obvious high drama but because they capture the feeling of what it was like to be alive in that moment.

Many of the stories are about the narrator turning away from the elements of his brother’s life – saying no to sexual offers from his brother’s friends, or not partaking in the various drugs his brother explores and generously offers. It creates a negative space in the text where most would be about how crazy those first time experiences are. Weaver’s interest is in finding the boundary between himself and his brother, and how those small choices led him to a place where he is married and a writer while his brother has been through multiple prison stays. How can they both have grown up in the same house and made mistakes and yet arrive at such different lives his book asks, and sees the answers in the slightest of moments.

The rest of it, his brother’s arrests and thieving from his own family, his father’s addictions and family’s Mormonism, in other words the focus of a different memoir, are all alluded to without intruding on the page, because these are not the ways that Weaver defines his brother. What matters is the complicated love of family, how Weaver can simultaneously look to up his brother and acknowledge that he’s incapable of making a good decision. “I/Love/You,/You/Fucker” indeed. When Weaver finally admits to his brother that he’s writing a book about him, he fears his brother will hate him. “Hate?” his brother says, “That’s not even possible. I’m proud of you.” And you are there with Weaver, so glad and grateful to have this self-destructive giant back in his life, for however long it might be.

The few moments of truly salacious stories don’t come from the partying and drinking and drugs, but those small mistakes that linger for years after. His shame is contagious in these moments, replacing the usual schadenfreude with an uncomfortable echo of your own failings. He confesses to setting traps in the woods and accidentally injuring his brother’s friend, or breaking into his best friend’s house and rifling through his parents’ things, and worst of all never admitting to them in the moment. You can sense how they have weighed heavy on Weaver in the years since, despite the others involved most likely not even remembering.

Most upsetting of all, he revisits a time when he crashed after a house party on the couch and then woke, in the middle of the night, to the sound of his friend raping a girl from the party. He is paralyzed, uncertain of what to do, and through his inaction allows it to continue. At the end of the story he offers apologies, but it feels like far too little. And how can it be any other way? He acknowledges that there is nothing he can do to fix it now, and “hopes this ’friend’ feels all the pain, and all the shame, that he’s created,” but it rings hollow on the page. He seems to assume we’ll grant him bravery for admitting to his wrongs on the page and then forgive him, which automatically strips the bravery away from the action.

Then that label of fiction comes along and blurs all the lines again. Only those three who were there know the facts of what happened. But whether or not that party and that rape did occur, the truth of it remains. Weaver wishes to apologize, if not for this failing then for some similar one, and we should let him, whether or not we accept it. The truth of these stories is what’s important, and it is plain in the text. A young man, blundering along during his own path from childhood to adulthood, looks up to his brother, and continues to love him even as the brother tears himself apart. All the rest are the details, and who can ever be sure of those?