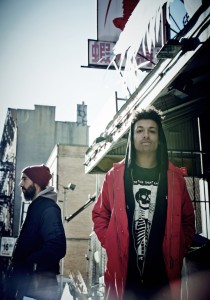 Think of Australian music and one genre unlikely to get discussed is rap. 23-year-old Melbourne native Remi is sure to change this. Whether he’s at the head of a movement or out on his own, this is someone who demands attention. Make no mistake, this is no novelty act talking about vegemite sandwiches and ‘more shrimp on the barbie’.

Remi pulls no punches on the single “Ode To Ignorance”, with a heavy beat and bass line driving the message about what it was like growing up as a minority in Australia. But there’s a lightness to his rhymes and a quiet power to the lyrics that draws you in. If we must make comparisons then he would be in good company with Disposable Heroes Of Hiphoprisy or Digable Planets.

The album Raw X Infinity is also out now and contains some lovely production, treading mellow jazzy vibes and synth riffs over dance-tinged beats. You’ll be nodding your head to the music and the messages.

“When was the last time you saw a black guy on Neighbours?” Keep this up and Remi may end up with his own show. Remi is touring Europe in May. Catch him now!