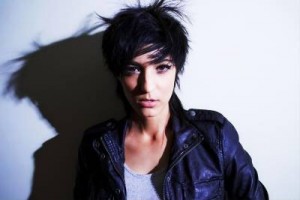 RABYT, a rock/pop/hip-hop artist out of LA, has released her second single, “Whatchya Got?” off her upcoming debut EP, The Noise. Whereas her previously released single, title track “The Noise,” showcased her rock n’ roll roots – with heavy, loud guitars, and pounding percussion – “Whatchya Got?” reveals more of RABYT’s hip-hop and pop influences. The track’s opening verse has a hip-hop vibe that then slides into a catchy, poptastic, rock-infused chorus that makes you want to sing along. RABYT’s cool, clear vocals on the chorus come almost as a surprise, following as they do on the heels of her hip-hop/rocker-chick vibe on the verses. Listening to the chorus, it is easy to imagine her voice carrying any of the radio-friendly, summer, pop anthems likely to be heard blaring at pools and beaches in the coming months.

This may be RABYT’s debut solo album, but she has been around music her whole life. Her Dad gave her a guitar when she was 10 years old and she taught herself to play and sing by watching him. At 15, she successfully auditioned for the Cleveland Orchestra Youth Choir and at 19, RABYT moved to New York City where she performed with a punk band, “The Bleeding Bombshells,” and as a solo artist. But it was while singing karaoke at a local club that she was discovered by a friend of The All American Rejects. She was soon a back-up singer with that band, performing with them on Jimmy Fallon and The Today Show Concert Series. She has also written and performed songs for two major motion pictures.

Her upcoming EP was recorded in Nashville and produced by Lincoln Parish (formerly of Cage the Elephant), who refers to RABYT’s sound as “a mesh of Adele and The Sex Pistols.” RABYT describes “Whatchya Got?” as an anthem for females, or anyone really, who is willing to stand up to those who say, “you can’t, it’s a stupid idea, or you aren’t good enough!” Listening to her music, it’s difficult to imagine RABYT was ever told that she wasn’t “good enough.” Indeed her singles have me looking forward to the release of The Noise; I want to hear all that RABYT can do.

Marguerite is passionate about words. When not with her 3 boys, she will inevitably be found either reading or writing; always with her latest, favorite music playing on repeat. An inveterate and insatiable researcher (some might say obsessive), she loves using her mad skills for finding the obscure to share her passion for art, music, and words. She also loves bold coffee and dark chocolate.