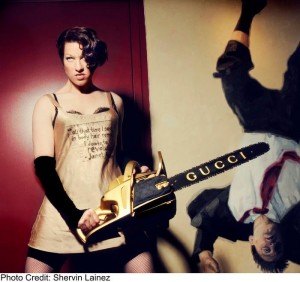 And it is the singer-songwriter that has undertaken her current “An Evening with Amanda Fucking Palmer” tour, a series of intimate solo shows in select US cities that are a mix of rocking keyboard originals, ukulele ballads, and readings from her book, The Art of Asking. After spending so much energy on Internet controversies, her TED talk, and book tour, Palmer just wanted to share music with the community of fans that she holds dear — and just maybe remind people how it is she got to a place of giving “TED Talks” and writing books to begin with.

Amanda recently took some time for a quick Q & A with us. So read up on what she has to say, then check out the cities and dates of her upcoming shows at the link below. And stay tuned. We have a more in-depth conversation with Amanda coming soon in Fourculture Magazine.

You are currently on the road with your “EVENING WITH AMANDA FUCKING PALMER” tour. How does it feel doing the “music thing” again?

It feels really wonderful, especially being pregnant…it’s like reconnecting with my whole family. After so many years of book-writing and TED-talking, it’s a very important reminder that this, songwriting and performing, is what I fundamentally do.

You spent most of 2014 writing and promoting your bestseller, “The Art of Asking.” What parts of the book writing process did you find the most challenging and would you ever consider writing another book?

As a songwriter and stage performer going into book-land, it can feel quite lonely. There’s no instant feedback, there’s very little improvisation, there’s a lot of slow perfecting that I’m not used to. It was a really good discipline, but I think if I had to do it again anytime soon I’d jump out a window. I did, to be fair, write this book on an incredibly strict deadline, which means it became all-consuming…and that wasn’t really necessary. I’d love to write another book on an entirely different deadline, on my own time, with a process that allowed me to laze a bit.

Do you feel like you have re-connected with the songwriting and music making part of yourself again since finishing the book tour?

Absolutely, at least the stage-performing and singing part; the entertainer. My actual songwriting brain is still hidden away in hibernation and hasn’t appeared yet. Getting pregnant didn’t help that one bit. It was like, as soon as the book came out and the clouds parted, my brain got taken over with thoughts that are now screaming BABY BABY BABY AGHHHH BABY instead of wandering back into songwriting land. But that’s totally fine with me. Thinking about babies is pretty fascinating, and totally new territory. My brain is actually enjoying it.

What’s your favorite and least favorite — the best and worst — parts of being on tour?

Actually being on stage, and actually getting to meet and hug people after the shows is what makes it all worth it. The other 19 hours of the day, carrying bags, waiting places, getting places, foraging for food: those parts are no fun. The world landscape becomes a very tired, sam-ey blur. It’s always been like that, though. I’ve been touring for 15 years — I’ve become an expert in understanding the trade-off.

What songs/albums/artists are on your favorites playlist right now?

Oh my god: John Grant’s Pale Green Ghosts is on 24/7. I can’t get enough of that album and his songwriting, he’s my all-time new favorite. Highly recommending: “GMF” and “Glacier.” I’m also listening to a lot of podcasts lately, since I’m thinking about starting my own, and the art of radio-listening is fascinating to me. “This American Life” has been on non-stop while I lay my tired pregnant bones down to bed early 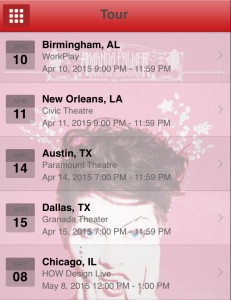