Bryan and Kendra met on Myspace in 2006, and released a few singles before meeting IRL in 2008. Their sound fit in the witch house box of the moment with influences from EBM, ambient, noise, dream pop, and a certain eerie aesthetics. They gained momentum as White Ring in 2010 with the release of Black Earth That Made Me – re-released in 2011 by English label Rocket Girl after the first edition sold out. They finally came back on Rocket Girl last month after a long break, with their latest LP Gate of Grief, adding a new band member Adina, and also releasing some extra tracks a few days ago on the same label, a collection of eight B-sides, including a cover of Neil Young’s Hey Hey My My. Still suitable for witch house die-hard fans, White Ring earlier fans, but also for incisive dark pop amateurs. 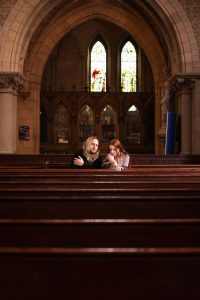 You guys just released some B-sides, what’s the story behind that and especially behind the Neil Young cover?
We had a handful of songs that never saw a proper release and fans had been asking for them for years. I thought it would be good to have them properly mastered and exist somewhere besides torrent sites. Hey Hey My My really captures the attitude we have towards making music. We kind of consider ourselves a punk band at heart. When Neil Young wrote that song, punk had kind of blown up and I just loved Neil Young’s response with that song. The whole idea of the spirit of rock and roll constantly changing and not getting stuck in any ideology is a big part of who we are as a band. Also, Kurt Cobain quoted the song in his suicide note and we wanted to release something in honor of him because he was so influential to us growing up.

Who else did you listen to, or go to see live while writing the new album and the B-sides?
We are inspired by so much and it’s always changing for us and that window is like eight years long so it’s hard to say. Probably the two shows that most impacted me though would have to be Prince and Throbbing Gristle.

Do you also get inspired by books, movies, TV, art, traveling….?
Yes, way more than music, at least conceptually. We all really like to read. We also like to record in new places to see what comes out. Gate of Grief was recorded in so many cities: NYC, Seattle, LA, Joshua Tree, Southern Florida, and Western Mass.

How do you divide work or do you work on stuff together?
We usually bounce ideas back and forth through email. We always have, but Adina and I are starting to do more live jamming to see where that takes us.

Tell us a bit your tech setup in the studio and on stage. Do you still change setups all the time?
Yeah, we aren’t gearheads though. We are usually trying to streamline things and take advantage of new and old technologies alike. We have been writing and performing more with heavy rhythm guitar as of late. We want to become a full live band one day.

Do you live in the world of your music, witch house and Myspace, or is your music a separate universe from every-day life?
To me it’s all the same until I see how others perceive us; then it feels very very separate. Yes, we go on MySpace everyday still.

How does every-day life, news, and society affect you and your music?
Not well.

Do you look forward to releasing more material, or videos, touring…?
Yes! We are recording our next EP now and plan to have it finished before the year is over. We also have another free mixtape (CHAIND vol. 2) coming out in October. We are starting to put together a tour now and want to tour everywhere that we can. We also just created a Patreon page and have a lot of exclusive music and video stuff we want to share. We have a manufacturing company that we are launching this fall. I hope that’s it.

Last words for your fans?
In the end, everything will be OK. If it’s not OK it’s not the end.

Written By
Nadia Says
More from Nadia Says
On my way to interview Precious Child some weeks back, I met...
Read More