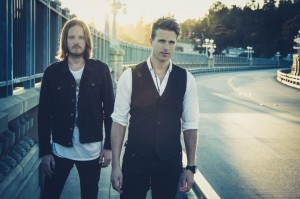 When crossing the world of pop, we’ve all encountered the modern day adaptations of music.  When turning on MTV or your local top-40 radio station, you hear a sound dominated by computer automation and not a lick of instrumentation.  Today, we get an equal balance of the best qualities of the genre. That’s because pop music is getting cleaned up by purveyors of pop: Project Dirty.

Way back in 2002, Micah Faulkner and Rhett Fisher met through friends purely by coincidence (we like to say the planets aligned).  After scoring a record deal, they finally released an album under their then band name “Manic Mind.”  Sadly, after gaining a following, their label was falling apart.  When their label dissolved, the boys were left wondering where to go next.  It took a four-year hiatus for them to find their version of Formula 409 to bring the shine to pop that the world deserved.

Last year, the boys released their 2nd EP entitled “Act 2,” which brings to the market a classic, refreshing pop/rock guitar sound met with the modern day electro edge.  The EP is very consistent with heart pumping beats and I promise you that you will not hit the skip button EVER (especially the pop lovers of the world).  It reminds me of the feeling I got from my favorite pop songs growing up in the mid-90s: pure music bliss.  It’s remixed nostalgia for those who happen to be of my generation (90’s kids).

So, it’s time to tidy up that iPod playlist and get clean with Project Dirty today.

If you like what you hear from Project Dirty, don’t worry.  This isn’t the end.  Stay tuned for our featured interview with them in an upcoming issue of Fourculture magazine (yes, we have to leave you hanging!! — SORRY!)

For now check them out on their website: http://www.projectdirty.com