Japan Soul is a self-described ‘wandering vacuum of ideas’ influenced by diverse genres and styles of music, including those from the different musical backgrounds of the group members.  But though Paul, Rozner and Lipp came to the group from different backgrounds, they share a common vision for Japan Soul: to create transcendental music that synthesizes art, dissent and euphoria through popular music.  In fact, one reason for choosing the name Japan Soul was because it suggests the successful combination of seemingly unrelated elements. When listening to this album it quickly becomes evident that Japan Soul has indeed realized the promise and potential of its name; Plastic Utopia combines disparate elements of style and sound in funky, inventive and unexpected ways that continuously surprise and delight the listener, from the first track to the very last. 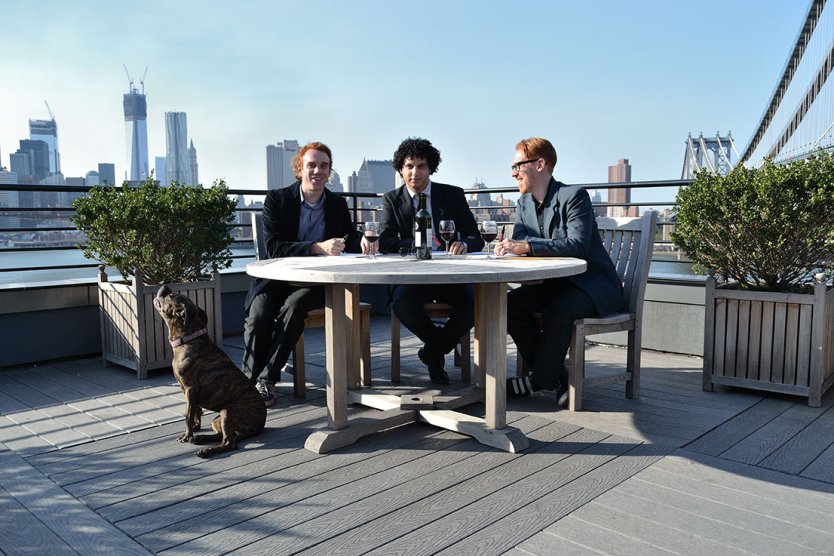 This ability to successfully meld disparate parts into a unique, unified whole is also at work throughout the album’s lyrics and themes. Plastic Utopia is more than just a smooth grooving album of retro-drenched sound; it is an artful protest of the dystopian aspects of our world today. Rather than telling a story, Plastic Utopia acts as running commentary on the ways present day society is moving towards diminished levels of autonomy, privacy, creative expression, and independent thought.  Every track is different, yet related; each song acting as a momentary spotlight on topics like public surveillance, the transitory nature of a digital world, public apathy, the increasing lack of privacy, and a consumption driven sound-bite mentality. Yet the album never becomes preachy or overwrought.  There may be big ideas here, but they are hidden in the album’s even bigger hooks. Ultimately, Plastic Utopia is intended to be fun and to make you dance. If it also makes you think, that’s just an added bonus.  Meticulously crafted over two years, Plastic Utopia is disco for a dystopian world. And if you pay close attention, you can hear how much fun was had in the making this album.

The first track, “War” is a standout.  It is a peppy, upbeat tune about how the public is deceived and manipulated during times of war. With synthesizers front and center, and falsetto vocals adding some “ooh, ooh’s” into the mix, “War” proudly displays its retro 80’s synth-pop influences. It has a hook heavy chorus that will have you singing along the very first time you hear it.  And matching such serious lyrical content with a peppy synth-pop beat is, I think, the auditory equivalent of a wink.  Japan Soul is signaling to the listener that their music is first and foremost intended as something to have fun with and to enjoy; thinking and contemplation are not required.  It also demonstrates that Japan Soul’s talent for successfully combining disparate elements is at work on many levels of this album.

The title track and first single off the album “Plastic Utopia” is another standout.  With a bass line so sexy it is obscene, this track lays down a smooth, funky groove and fills it out with layers of quirky percussion, saxophone, and guitar. Sumptuous bass is my kryptonite.  If you add a funky groove, I get weak at the knees. Obviously this track is one of my favorites on the album, if just for that reason.

But it also has lyrics that act as a reflection on the state of our society:

However, when the lyrics are sung in alternating falsetto and a deep baritone voice makes it easier to slip past all the words and move into the song’s easy, smooth groove. If later you decide you agree with the song’s sentiment, so much the better. “Transparent” is another one of my favorite tracks on the album.  The track takes a Latin rhythm to which it adds elements of pop, rock, funk, and disco. The result is a fabulous retro-infused, foot-tapping masterpiece. Think if Miami Sound Machine, Electric Light Orchestra and Wham! were somehow combined. It’s pretty awesome.

Plastic Utopia is a fun album full of outstanding tracks.  Japan Soul’s eclectic pop songs take seemingly random elements of art rock, soul, funk, and synth-pop, and then meld them into a unique sound with a clear retro-vibe. As an added treat, the song lyrics are intelligent and provocative, with plenty of meat to chew on, but never feel preachy or overwrought.  The message being to listen, enjoy and have fun with the music first; sing along as loudly as you want and dance until you can dance no more.  Those who are so inclined can always contemplate the state of the world when their feet are too tired to dance another step.

Available at all digital stores April 29