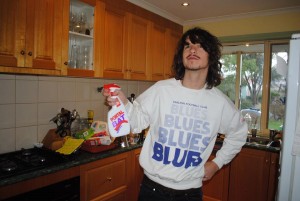 Some may say the definition of insanity is doing the same thing over and over and expecting a different result. Others may look at insanity as a risk-taking move. When it comes to music, after six weeks opening for Courtney Barnett on her European tour with his band Money for Rope, Melbourne’s own Chris Loftis took a break from his rigorous beating of the drums to take his own possibly insane risk by jumping into the synthpop scene. Earlier this month under the moniker Portal Bat, Loftis released his debut EP entitled Slow Boil.

With the intro track, you’re entering into what almost feels like a more modern fantasy based video game with gentle bells directing your path and a bellowing making you question what’s around the corner. This gives you a little taste of what is truly to come.

Following this you’re brought into the lead single, “Slash Bang”. The song has a bright feel with its light synths and very upbeat loops but it isn’t as bright as the melody suggests. It has a rich pop vocal, sounding like Chris Loftis is doing the work of multiple vocalists with crisp layered vocals reminiscent of an Animal Collective track, but with lines that describe the need to heal upon the daylight, it feels as if he’s running from a dark relationship in his past. “It’s a cursed damned night here amongst your demons”

Adding to what seems like a trademark theme on the EP is the track “Cerberus” which is another upbeat melody met with a darker edge. The song covers the knowledge of when your time is officially up within your relationship. The perfect track when you don’t know what to say to someone who really needs to get over their partner. “But she gets lonely and I know I’m not supposed to care, but her demons haunt me like they are my own.” It really is a bit of a twist as you would never expect such a summery synth melody and constant hi-hat cymbal with the theme. It feels as if Portal Bat wants all of us to look at life through a different lens like it’s a really okay and positive thing to let go for good.

If upbeat isn’t your thing, the track “Shrine” is for you. It feels a bit Radiohead in its melody. “Shrine” is another track that covers the darker side of relationships with a slow piano highlighting the pain. It describes through the lyrics the pain of being alone and suffering through what could have been a very volatile relationship.

The aspect that really shines brightly about Portal Bat is that he does not play by the rules. The upbeat tracks don’t have to be the happiest songs in the world and not every slow track has to have a dark ending.

Portal Bat On The Web:

Please note, on Bandcamp the price is name your price. We here at Fourculture encourage you to pay what you can to keep the music alive.

Written By
Serena Butler
More from Serena Butler
It’s  crazy when a song seems to depict a chapter of your...
Read More