Indie post-punk band Porcupine released their latest album The Sensation of Being Somebody on LP, compact disc and digital download back in April and have also released a single on vinyl titled /A*Split last month. Though the vinyl single is a little more recent, the preceding album is nothing to sneeze at; this three-piece band was able to crank out twelve tracks that appeal to the restless suburbanite in all of us.  Porcupine has also performed at SummerFest on June 29 in Milwaukee, Wisconsin as part of an exciting lineup that’s a hit with music fans everywhere. 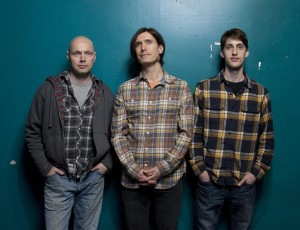 As was said before, the band consists of only three members: Casey Virock on vocals and guitar, Jeff Bahr on drums and backing vocals and David Reinders on bass.  They also have guest musicians on select tracks; Nick Roesler plays guitar on “Second Thoughts”, Matt Monsoor is on piano and Jen Virock does vocals on “No Surprise”, Jeff Sherin gives us a guitar solo on “Hit Me With a Smiley Face” and Nick Schreck plays another guitar solo on “Nothing Between Us”. Despite their choosing a simple formula for a band, these post-punk rockers give us an enthusiastic sound that possesses the dark heart of 90s grunge and the fast pace of rock of the new millennium.  It’s quite obvious that these guys would like to bring back the time when rock was less about appealing to the bland, mall-going masses and more about reinventing the true rebellious spirit of rock and roll.  The Sensation of Being Somebody restores my hope in this abused and misused genre.  The diversity of the guitar riffs and the sincerity of the cynicism of the lyrics (especially in “Second Thoughts”) make me long for my flannel shirt and my old black Chuck Taylors (both which I do own and which would be intolerable in this summer heat).  The fast-paced rhythm gets my head banging back and forth and allows me to have a good time. I know David Grohl would be so proud listening to this band pay homage to their grunge roots and their embrace of modernity.

Not to be outdone, the vinyl single “Force Field” brings about a bouncy feel without the fluff of repetitive chords or mediocre lyrics.  The ending solo ends up taking me higher, to another ground; a sentiment that makes me believe that there is a better place besides this earth, distant yet reachable; abstract yet not unattainable.  This missing creativity is what is desperately needed to help revive rock from its stalemate presence in the 21st century.  Porcupine has become another living example among indie bands about how one does not need to sacrifice the past to fit into the present; rather, it is said tribute that allows for great music to be created for the present and to be immortal in the future.