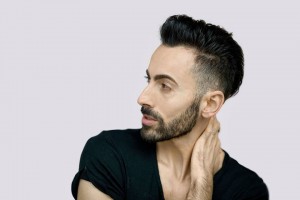 You don’t have to ask me twice to listen to Raff. Sixteen issues later since our interview, Raff has released an amazing FREE track to the masses entitled “Please, Listen to Me” ft. Ciarri Winter. The track is the antithesis of what you’ve typically heard from Raff in the past with his electro-dance-pop styling. With a fine use of a guitar plucking with a smooth R&B, melody it’s a beautiful direction for Raff to travel in. Since Raff is very versatile in the pop spectrum, this isn’t too much of a surprise. When it comes to the vocals of Ciarri Winter, just stop right there! Her voice is like the spawn of Macy Gray and India Arie in the best way that one could imagine, breathtaking. “Please, Listen to Me” really covers the emotional spectrum of what one feels after a horrible argument with their significant other. The meaning behind the song seems to be that if you let a cooling off period occur then you can and should be able to discern whether or not you want to be in a relationship. A pure emotionally driven gem of a track, “Please, Listen To Me” will give you chills from head to toe.
(FREE DOWNLOAD below!)

Along with the release of the track is the video is the release of the video. Shot in Paris, the video takes you on a journey though the perspectives of Ciarri and Raff as they take their alone time to collect their thoughts after a rough night. From Ciarri’s bedroom window to Raff’s stroll down the Seine River, the Paris atmosphere looks like the perfect trip if one ever wanted just to get away from general struggles of life. At the end, you’re treated to a performance of Ciarri at the piano. Ciarri is nothing but raw talent at its finest.

If you’re one of those who love getting to the raw/funny bits behind the making of the videos. Raff has also vlogged his journey of making “Please, Listen to Me” for our entertainment. This is an awesome chance to get behind what you never thought you could see before. You may be left craving wine and sausages after watching. Just warning you…

Written By
Serena Butler
More from Serena Butler
Some may say the definition of insanity is doing the same thing...
Read More