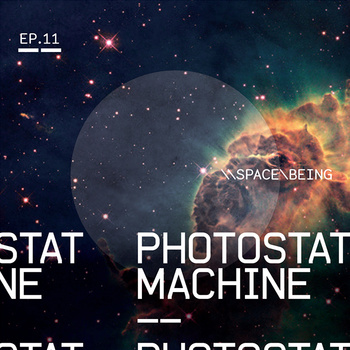 Picking the creative brain of each of our contributors is an honor in itself. When our pals and contributors, Photostat Machine, dropped their latest EP Space/Being in a lead up to the release of their new album, Staring into Space, I was honored to get the chance to take an advance listen.

For the EP, you get that signature electro/synth goodness that Adam and Nik really have become true masters of.  The lead single off the album/EP entitled “I Can Never Be What You Want Me To Be”  is really similar to that of the Omaha, Nebraska band The Faint, so if there are any fans of the Faint out there… this is the song to check out.

The song enters in with a very heavily aggressive, almost metallic synth that covers a story which translates as a broken relationship with one partner trying to mold their significant other into something that they’re not. The relationship seems so irrevocably broken. It may look the same, but it doesn’t feel like it used to in the beginning.  Another thing noticeable about the song is that the title isn’t used in the lyrics, but is clearly implied with each description of how you can’t exchange a broken person for someone/something new.  As the lead single from the new album, it gives a great taste of what’s to come for the tracks you’ve yet to hear.

The track that really excited me was the collaboration between our friend/contributor, Sylvie Hill, and the guys, entitled “Protection.” I’ve always been quite amazed with the art of turning spoken word into song. This time around, spoken word artist Sylvie Hill’s work plus Photostat Machine’s beautiful yet dark orchestral synths and piano bring the whole art of poetry to a new level.  I find it a great, unique experience to view people from other sides of the world (i.e. Photostat in the UK and Sylvie in Canada) coming together and make a piece of collaborative art (being music and poetry).  It really makes the world seem much smaller than it actually is.

The song brings this whole cinematic, almost 1920’s, view of a man meets woman in a speakeasy or a house of ill repute. You hear this story of man meets woman; then the drinks begin to flow. The heavy piano in the background transported me into what felt to be Boardwalk Empire. It feels like it could  go either of two directions with a Pimp/Prostitute meet up for “protection” ending with sex or a guy finds a talent in a woman offering his security to her, making her a star, then ending with a sexual relationship.  No matter the view, it’s a great collaboration.

Truly Space/Being is one EP that transports you through some of the most interesting rollercoasters of emotions with every song. From anger, to lust, and high energy dance tracks there is no stone left unturned.  There’s a little something for everyone on this EP, and even more on the album coming soon

Also, Photostat Machine offers their music for free. As always, we encourage you to buy it if you love it!