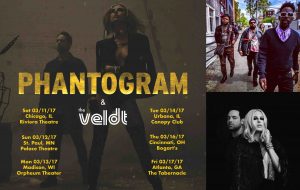 Phantogram will be unleashing their alchemical electropop in six exclusive gigs before jetting off on their European tour. They’ll be back on US soil to make two separate appearances at Coachella mid-April so this is a golden chance to catch the duo before they skip time zones and wow crowds in the European spring.

They are joined by shoegaze-soul pioneers The Veldt who will be releasing their first recording for 15 years with the release of their EP The Shocking Fuzz of Your Electric Fur: The Drake Equation on June 2 via Schoolkids Records. It is packed full of their trademark dazed guitars, melodic fog and shimmering layers of dream pop.

Bona fide legends in the genre, Pitchfork recently acknowledged this including their 1994 opus Afrodisiac in the top 50 shoegaze albums ever released. Today their sound recalls the likes of A.R.Kane, Cocteau Twins, Massive Attack, and Jesus & Mary Chain.

This is a rare opportunity to catch two musical innovators on the same bill. You can book here:

Written By
Mike Stanton
More from Mike Stanton
We here at Fourculture love discovering new and underground music and A...
Read More