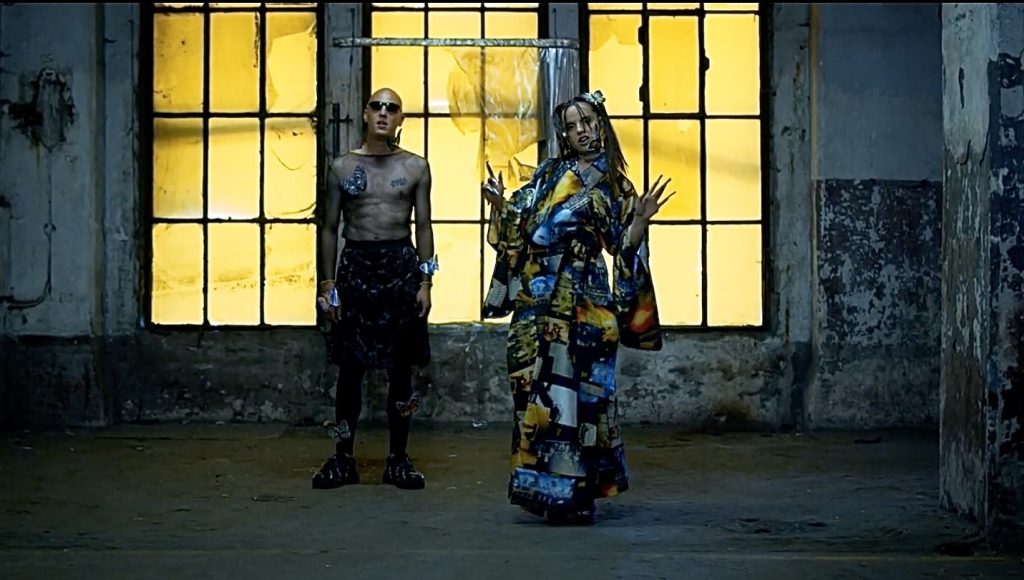 If Johnny Got His Gun made an artistic impact on the anti-war movement, ascendant vierge’s Petit Soldat (Little Soldier) as illustrated by Jamie Harley might too for a younger generation. The track is a punch in the face – or a bullet in the heart, allying ethereal and heavy sounds, while the video oscillates between grandiloquence and absurdity – the absurdity of the human condition in the face of war.

Franco-Belgian outfit ascendant vierge, aka Mathilde Fernandez and Paul Seul, do have a habit of creating effective and striking music, their own take on modern-day hardcore (and gabber) if you will, assorted with saturnine French lyrics delivered in crystal-clear vocals – yes all this and despite the duo’s very minimal studio setup and relatively recent emergence in the scene. ascendant vierge are also known for spoiling their public with dazzling videos, and this new one by Paris filmmaker Jamie Harley does not disappoint. Here is how the Petit Soldat opus came to be in the words of its makers.

How did this collaboration happen, Jamie did a video for Koudlam’s track Negative Creep that had a gabber flair, was that part of the connection?
Paul: Yes, we met around the time of the shooting of the Negative Creep video. I kinda helped to facilitate shooting at MOH – Masters Of Hardcore – a huge hardcore festival in the Netherlands.
Jamie: Yes, exactly. Paul really had a key role in the filming of the Negative Creep video. We shot it over five or six weekends in Germany and the Netherlands. I didn’t know well the hardcore and gabber scene; he was a precious guide and the perfect introduction to this whole culture.

And what was the creative process like from concept to the final result?
Mathilde: Since Paul and Jamie knew each other for a while, we asked him to do whatever the song inspired him to. As the song is pretty graphic in the lyrics, we absolutely didn’t want to choose a subject or a way to illustrate what we were saying. Jamie told us very quickly that he wanted to do the history of humankind through the prism of wars and battles, from the prehistoric era to our era and even beyond, with images picked from B movies or TV shows.

Jamie, it’s been a minute since you did a music video…
Yes, this is my first new video released in something like four or five years. I had been doing music videos very intensively for nearly ten years and at one point I really felt the need to take a break and to start traveling instead. And that’s what I did until I got grounded like everyone last year.

How did your work on Petit Soldat compare to creating other music videos?
I have a lot of respect for ascendant vierge; I love how bold, brave, and flamboyant they are, and when Paul contacted me, I felt I was in friendly territory. In general, I only accept to do videos if I come up quickly with an idea. Otherwise, there’s a risk it ends up being a tedious experience and possibly lead to a boring video. For Petit Soldat, I knew pretty much right away what I wanted to do, and after that, the whole process was easy and straightforward. It was exciting for me to do a very literal video and not to hide behind a cryptic concept. Also, the song had so much energy; I knew that it would be an interesting challenge to match it visually.

And what impression did you want to convey with this piece?
I always love to associate contrasted feelings and to do abrupt changes of tone. The video is just as much silly and fun as it is dark and pessimistic. War is dumb and tragic, exhilarating and depressing, and I wanted to connect all these feelings together.

Mathilde and Paul, the Petit Soldat audio from the video is a bit different from the live version from a few months ago, isn’t it?
When we performed Petit Soldat in Brussels and on Sequence, the song was very young. We made it a year ago during lockdown, and we pushed it a step forward in the last studio sessions. And Paul wanted to use his vocals for some tracks for the live shows. Petit Soldat was perfect for his backing vocals; so we decided to push his vocals and record them with a distorted punkish treatment.

Now that the video is out and that people love it, what’s next?
Jamie: Besides doing music videos, I’m also working as a music supervisor on French feature films and I have collaborated with directors like Michel Hazanavicius, Julie Delpy, Sébastien Lifshitz… For me it’s pretty much the same thing in the end: I’m always syncing music and images together!
Mathilde & Paul: We are producing on ascendant vierge non-stop for two years now; we work every week on new tracks. We are satisfied that our sound has found its public, the nice words and people filming themselves dancing and screaming are our joy.  We would love to take our songs to clubs but honestly, we can’t count on it before some time. We have three shows planned in Paris in September; we can’t wait… fingers crossed they happen.

Written By
Nadia Says
More from Nadia Says
I met Simonne Jones four years ago and like everybody else around...
Read More