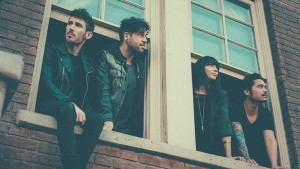 Parade of Lights is back with a sound that is bigger and better than ever on their debut album Feeling Electric, set to drop June 2nd on Astralwerks Records. Bursting with the pulsing, alt-electro, synth-pop that fans first heard and fell in love with on the 2014 EP Golden, the LP is a collection of radio-friendly tracks, each mixed to perfection and poised to be the summer anthem of 2015.

Feeling Electric’s eleven tracks include the four tracks previously released on the Golden EP. The opening track is the short, other-worldly sounding “Intro” that seamlessly slides into the title track, and first single off the album, “Feeling Electric.” This is a highly danceable track with a big, wide-open sound, punchy percussion, and a positive vibe. It is easy to imagine the crowd at a festival with their fists up while singing: “I feel just like I did when we connected. Feeling electric”.

One of the stand out tracks on the album, and my favorite, is “Undefeatable.” It’s a song that lets you know from the first note that something big is building – and it does not disappoint. It is an arena-ready anthem with a driving beat, soaring vocals, and a chorus that demands you join in. It is absolutely awesome. In general, the album leans more toward the anthemic, with many tracks having a big, layered sound and hands-in-the-air sensibility. The stand outs among the rolling, expansive, anthemic tracks are “Wake Up,” “Can’t Have You,” “Golden,” and “We’re The Kids.”

But the tracks that have a slower tempo and darker, more serious lyrics also have the lush layers and crisp percussion that are fast becoming part of Parade of Light’s signature sound. While “Burn” does have a big, alt-electro sound and catchy chorus, its darker lyrics lend the song a grittier and more serious feel. That, and its seriously wicked bridge, “And if you go up in flames/ I think you know who’s to blame/ I know that you’ll never change,” make it another one of my favorites on the album. Other slower tempo tracks that need a mention are “Silver and Gold,” a sexy song with an R&B groove beneath layers of synth, and closing track, “Memory.” With gorgeous harmonies and sad, serious lyrics, “Memory” was an awesome choice for the closing track as it leaves the listener wanting more and reaching for the repeat button, to start the album over again.

Feeling Electric is a polished and cohesive collection of songs that shows off the band’s anthemic, alt-electro, arena-rock sound, as well their gorgeous, poignantly soaring, slower-paced tracks. It is an impressive debut album and one that I highly recommend to anyone looking for the perfect tracks for a summer road-trip or pool party playlist, as well as to all who appreciate highly polished dance tracks. This band’s vibe may scream ‘Party!’ but make no mistake, the individual members of Parade of Lights are seriously creative, talented, and hard-working artists

Parade of Lights has been garnering much deserved attention. Their song “Golden” was featured during the ESPN Super Bowl XLIX coverage, the NBC Sochi Winter Olympics, The Voice, and by Mazda. They have toured with Imagine Dragons, The Neighbourhood, Fitz & The Tantrums, and Thirty Seconds to Mars. And as soon as the album drops, the band will hit the road to play eleven shows with fellow alternative artist, AWOLNATION. Then the band will make their first festival appearance of 2015 at “Life is Beautiful Music & Art Festival” in Las Vegas. For up to the minute schedule information check out the band’s social media links below.