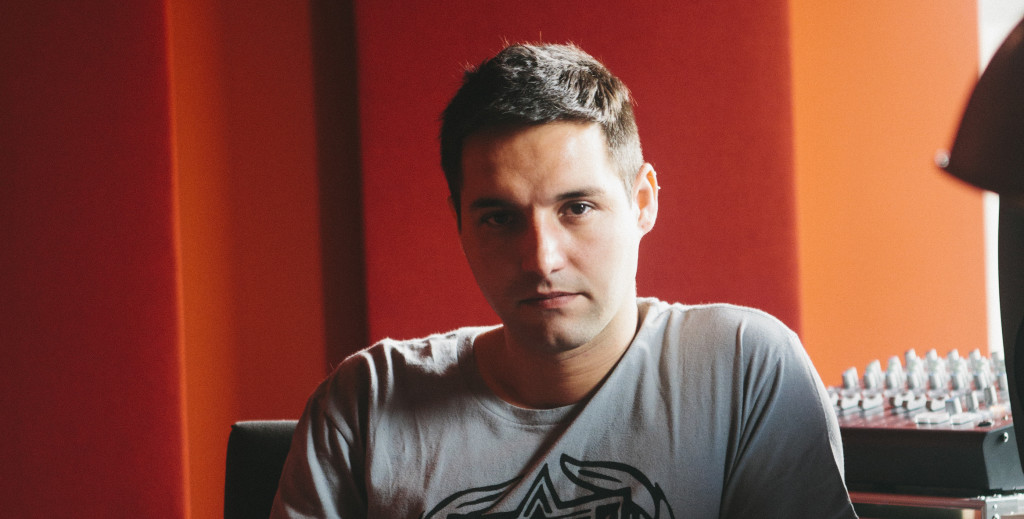 In the most recent issue of fourculture, we brought you the enchanting world of :PAPERCUTZ, masterminded by creative genius Bruno Miguel.  We got not only the chance to interview Bruno in that issue but we now also have the opportunity to share the incredible work of :PAPERCUTZ with you!  Check out our track by track play of the newest :PAPERCUTZ album, The Blur Between Us, along with a description and inspiration from the artist himself.  Listen, learn, and get into the heart of Bruno Miguel as we bring you The Blur Between Us.

“Into The Storm’ + ‘Before The Day Reigns”

These songs have no dead space in between, since one song’s lyrics are a reaction to the other. Our main character receives the following news:

“They sing out your name,
as the hourglass runs out.
Their words cut through the room… driving me into the storm.”

Imagine this is taking place in a hospital but it feels so surreal (as most hard news feels), that it’s like words are floating in the air and as they sink in, he breaks down. With that in mind, he runs out into the streets with stormy weather mimicking what he’s going through; he roams the streets all through the night until day light comes. There’s now a notion he’s somewhat different, recognizing that “The end is now a part of me” (influenced by reading Haruki Murakami’s Norwegian Wood  — “Death exists, not as the opposite but as a part of life.” )

Imagine a cut to a scene years later, where our main character is lost in the woods after running away from his home, lost in an existential fight with his inner demons trying to find a balance (a new home) before returning to the place he left and possibly his family (“I’ll own the night beneath the sky, Home is where the river’s dry.”)

When he finally comes back, like a war returnee he feels out of touch with the world, as if everyone were acting out parts laid out for them: (“Man is least himself when he talks in his own person. Give him a mask, and he will tell you the truth.” Oscar Wilde reference to our social self) He feels he needs to finds his own space, breaking through what once was expected of him (“So far I’ve played out my role, in a play that is no more.”) ‘The Fourth Wall’ is also a term in theater, the imaginary wall through which the audience sees a play take place on stage.

Still some of his inner demons come back to haunt him, but he starts realizing that all his tainted memories have a place in time (“memories fade”).

“Redenção” is the Portuguese word for Redemption; the song features the instrumental leitmotiv (spread through two of the album’s tracks and on the last hidden theme…yeah, I know, who does hidden tracks anymore?!) associated with him trying to make amends with his situation.

In his continuous (inner) fight the main character starts to recognizes certain traits of his personality, as if sometimes he’s more than one individual, a good/evil double-faced person. He names his angrier side as the ‘Silent Passenger’, a driving force that fuels him with hate and makes him feel partially good (“I feel alive when he takes control, letting me know he is in there” ) but ultimately it’s a cause of destruction (“Nothing else could care for me, not even you. Or is that just his allure?”) since it makes him want to shut everyone else out of his life (kudos if you spotted the ‘Dexter’ reference).

It is at this time he finds a like-minded other (“Inside his mind, buried in her mind, a common ground, their common ground.”) and starts to feel the need to open up and maybe share his life; we’re transported to an Adam and Eve sort of scenery

Seeing the world for the first time through another’s eyes, more innocent than him, he’s afraid the world may destroy her (“My porcelain beauty…will you ever break?”) and recognizes the fragility of humans relations and how in the end it’s important to fight your personal quest with someone close to you to share your wins and losses.

That someone who will take the chance and share their existence with you (“I’ll follow you”) as you start your adult years with this newfound knowledge (“Into the wild we go…the greatest unknown!”) life, that is, the greatest unknown. This is a reference to Maurice Sendak’s “Where The Wild Things Are” in that growing comes many times from an inner angst of not letting anyone impose their beliefs on you, finding out for yourself but appreciating those around you as well.

:Papercutz on the web: