Las Vegas pop-punkers, Panic! At The Disco have never shied from sexual diversity.  During the days of the “Nothing Rhymes With Circus” tour for their first album A Fever You Can’t Sweat Out, frontman Brendon Urie and then guitarist, Ryan Ross, played with the illusion of a romantic relationship.  Victorian era costuming and a flair for the dramatic were the sources for more than one homo-erotic fan-fiction story involving various band members.  However, that was a a few years ago so it was strikes as odd for Westboro Baptist to decide to stage a protest the band’s current tour. 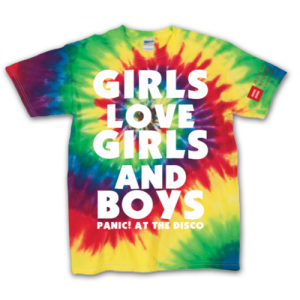 Other musicians have come up with some very creative ways to deal with this group.  Most recently, Brad Paisley took a moment before hitting the stage in KC to shoot a “selfie” in front of WBC protesters and posted it to social media with a sarcastic comment.  However, Panic! At The Disco chose to make a beautiful statement with their response to the hate group.  Upon hearing of Westboro’s intentions front man Brendon Urie announced, via social media, that the band would donate $20 for each protester who showed up to the Human Rights Campaign.  The donation would be in the name of Westboro Baptist.

WBC made a very “weak showing” (in Urie’s words) with only thirteen members in attendance.  The band felt $260 wasn’t enough so they kicked in a little exta — the check was for $1000 plus 5% of their merch sales from the night.  But P!aTD didn’t stop there.

On July 30 both HRC and Panic! At The Disco posted on their sites the additional support the band was doing.  First, they released the director’s cut of the music video for “Girls/Girls/Boys”.  The latest single from their album Too Weird To Live. Too Rare To Die addresses “Love is not a choice”.  This edit of the video is more explicit in its depiction of the theme of the song than the original version released by Fueled By Ramen last October.  It hits back hard not only at WBC but homophobia on the whole.

Second, two new t-shirts have been added to P!aTD’s merch.  “Girls Love Girls And Boys” and “Boys Love Boys And Girls” emblazoned on a rainbow tie-dyed background show the wearer’s advocacy while 100% of the $25 price tag goes to HRC to put even more muscle behind those words.

A little additional searching through HRC’s Facebook turned up the organization’s thanks to Panic! At The Disco for their efforts.  They are also offering the opportunity to “sign” the HRC’s  digital Thank You card by making a monetary donation.

Panic! At The Disco continues its North American “This Is Gospel Tour” with stops in Boston, New York and Philly this week.  The tour wraps in Portland, OR at the end of the month.

Footnote: The exclusion of the word “church” referring to Westboro Baptist is intentional on the part of this writer.