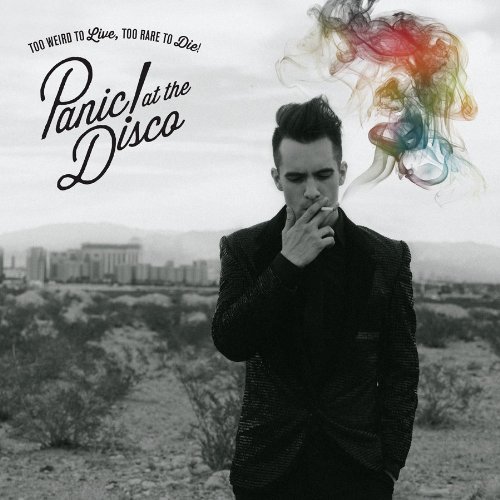 Too Weird To Live, Too Rare To Die! is Panic! At The Disco’s fourth studio album.  The second with the current line-up.  It’s been a while since I’ve listened to the group.  It was hard to let go of the original group.  But there’s been a great deal of buzz about this record.  Won’t lie, I came in with serious skepticism and expectations.  For me, Panic! At The Disco must always deliver great lyrics, impeccable and insanely talented instrumentals, drama and theatricality.

As a complete album Too Weird To Live, Too Rare To Die! is a pretty decent product.  It is concept in that it has a defined beginning, middle and end providing an atmosphere of cohesiveness.  “This Is Gospel” is the welcoming track that announces that Brendon and company have arrived.  There are familiar musical and lyrical signatures that make you comfortable and ready to hear more. But then comes the middle which proved to be a bit of a rollercoaster ride.  “Miss Jackson” is a good song and features Lolo.  Honestly this should have been a collaboration with Fall Out Boy.  It is a perfect platform for a great protest song sing-down between Patrick and Brendon.  Not a bad song just could have been a lot better.

“Vegas Lights” starts out with a sample from Sesame Street which they try to tie to this odd countdown segment of the chorus.  The lyrics other than that are pretty ok and the song will offer great audience participation parts in a live show.  This song definitely tells the darker side of the band’s hometown.  Musically it’s standard radio fare and for that they’d be wise to release it as a single.  It would chart well.

“Girl That You Love” is a slower dance number whose point seems to be how many audio effects could be added to Urie’s vocals.  It becomes a collection of a studio engineer “seeing what this knob will do”.  It is really a boring song.

The opening for “Nicotine” had me prepared for more downhill running on this record.  Then came the wordsmithing I used to love Panic for.  This song is downright ballsy and restored my faith in the band’s courage to say “Damn the radio. Full speed ahead”. Great dance beat and intelligent analogy.  This track will have the joint jumping and is an addictive earworm that will be hard to get out of your head.

“Girls Girls Boys” is a tricky song, lyrically.  It’s a great dance song.  Lots of energy but I’m still trying to discern all the words.  It almost sounds like the band is dealing with the subject of bisexuality and I like that.  As stated previously, one of the things that launched Panic! from MySpace to arena tours in less than two years was their shear guts when it comes to wordsmithing.

“Casual Affair” is another trip through the studio effects but this anthem does it right.  The electronics bring that drama I’d been waiting for.  This song is grandiose and well produced.  Epic instrumentals but Brendon’s voice still plows right through them.  This song is the album’s punch in the face and then they sprinkle some old-school PaTD honky-tonk piano on the end to take away the sting.  Great, great song.

“Far Too Young To Die” – OK, this one starts with really cliché drum triggers and organ but you can’t help bobbing your head to it.  The instrumental and electronic intro is almost a full minute of the song.  Then comes the classic Panic story of bad romance.  This song has music video written all over it.

The final song goes for the obvious in the title “The End of All Things” but that’s where the predictable ends.  This song shows how vocal effects should be used.  I’ve been wracking my brain all night where else I’ve heard the use of vo-cording to create the harmony line from the same singer.  This song is tiny and huge all at the same time.  It expertly mixes an old upright piano, violin and electronics into a spectacular painting…the one at the end of the gallery that you sit on the bench and don’t want to leave even when they turn out all the lights.  This will be the absolute perfect encore number to close their shows.

So in the end, this is a really good record.  It’s definitely worth purchasing.  It’s both a good winter as well as summer album so I think many people will have it queued up on their ‘pods on a regular basis.  Props Panic! At The Disco, job well done.

Panic! At The Disco on the web: