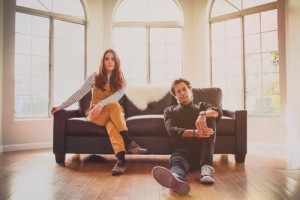 Labelled as ‘anti-folk’, the five songs featured on Let me Run take in a variety of genres and eras to ensure it’s a worthwhile listen.

Taking centre stage is singer-songwriter, Marissa Lamar whose vocal is sweet, sultry and deadly in equal measure.  Jangly opener “Plastic Towns” is like Camera Obscura but without the quirks, while “The War Inside” is a driving modern epic with spoken Kim Gordon-like vocals.

Despite the upbeat vibes and occasional chaos, it is “Freckles” that is the highlight with its gorgeous simplicity and nostalgic strings.  It has a timeless feel, the sort of song you want to listen to on a rainy Sunday afternoon.  Highland Kites on Facebook

After impressing with debut, “Good Enough”, Venice-based project Chelsea Effect return with the compelling new single, “Van Gogh”.  Written about the torture of being an artist, it drifts along with an underlying drama with the dream-like, trippy arrangement complementing the madness of ‘shadows on walls that are leaving a stain’.

Written By
Paul Davies
More from Paul Davies
‘What would Nick Drake do?’ I love music that asks questions but...
Read More