For many years now, we’ve been hearing the same generalized alternative/pop/rock sound on the radio.  I am guilty of this indulgence from time to time, so you are not alone. When it’s good, it’s good! Until now there has been a reoccurring lacking of something in the alternative/pop/rock genre; that being no international diversity. The sound of today’s alternative/pop/rock bands really needed a complete update as well. Today, we wait no longer. We here at Fourculture have been given a chance to take a listen to the debut full length album of Berlin based band Consin, entitled Brink of Unity. 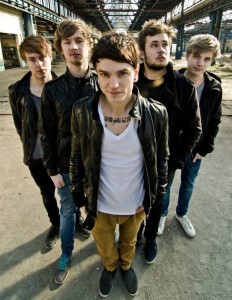 To be honest, whenever I start an album with a pop/rock edge I’m generally apprehensive. My mind tends to fill up with the “this is nothing new” thoughts swirling. Yet, when I put on Brink of Unity I was completely surprised. The last time I had heard something even relatively close to what Consin delivers on this album would be if you envisioned a harder or more intense version of the band Mae.

As with any album there were stand out tracks that deserve some glory. One of the tracks that really shines is “Fen Fire.” The song opens up with a guitar rhythm similar to a great grunge track of the 90s. When the song gets further in, there’s this interesting vocal effect that is very sci-fi/robotic and properly used, kind of like what Muse has been doing as of late. With those twists, along with a great vocal melody in the chorus, the boys of Consin have brought something that could not have been imagined (by me at least); a merging of every rock subgenre in one song.

For the lovers of a pure rock/alternative sound, the opening track entitled “Far From Ascending” will be your favorite.  I see the song becoming a great opening song or closing for them in concert. You have every element to get the party started or have the fans going home on a high note: an opening drum solo met with an aggressive guitar riff to warm up the pit. Then, warm vocals to slow it down a little bit and speed it up with the beat. Lastly, the song ends with a call and response from the crowd that could only compare to a classic style that you could spot on the Warped Tour.

Their album dropped digitally today worldwide!  Download your copy now so you can experience the elements that have Consin mesmerizing us here at Fourculture. These guys have got a little something for everyone; for me that’s saying quite a lot. Consin is clearly ready for their big international leap but I have one question for you: Seid Ihr bereit für Consin?

If you like what you seen/heard from Consin you can purchase their album on iTunes.