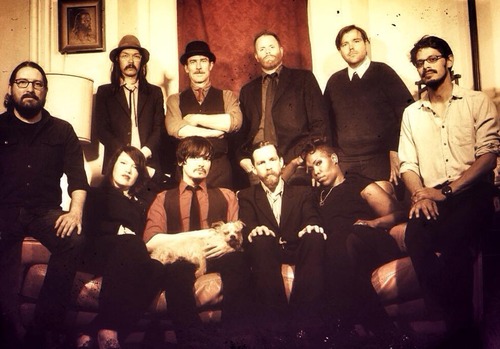 Carnivàle was a show on HBO back in the early 2000’s. It was a time piece, very odd and dark based, on the carneys that traveled from town to town during the Great Depression. All at once something that may frighten you compels you to take notice…May I present to you the band Northern Arms.

Northern Arms’ self-titled debut was released on June 17 and has already been named one of CITC’s 35 Best Albums of 2014 so far. Much of the music has a dark, brooding almost dirge like feeling. The mixing of styles — a bit American Gothic and Folk with a nice dash of Tom Waits — produce an interesting musical adventure that I have not taken in the past. Once you pick away the layer that may make you uneasy, you realize there is something fascinating here.

In listening to the album, there are two standout songs that I enjoyed. Below the Pines was like discovering that special place in a dark forest. The place where the light just shimmers down through the tree cover and you feel comforted. That’s not saying that the song is some throw away pop nugget. In contrast, the feeling of sadness wraps around the beauty of the music while Keith Richard Peirce’s vocals are soothing in their despair. Let the Water Come Down is where I feel the band really succeeds in the perfect mix of styles. It had a gospel feel towards the end and while the subject matter is not typical, it was very well crafted.

Northern Arms will continue to hone their sound and I think has really clicked into a new niche. I suggest you step inside the tent of the Carnivàle download this record and let the carneys of Northern Arms entertain you.