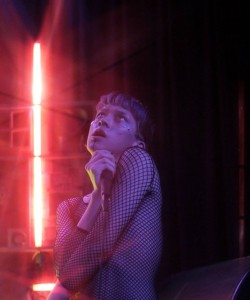 Bailey Skye aka Nightspace is a Seattle-based musician and performer. He started producing music in the summer of 2012 and has a new EP Untrue due for release on October 16 on Seattle-based label Flat Field Records.

Nightspace creates unsettling, basement dwelling electro-grime. His sound is dark, distorted and hypnotic. It seems to exist in that hypnagogic state of consciousness, the phase of lucid dreaming, realms of half-sleep .

Lead single “Mean Kids” is a place of monsters, of flickering monochrome images, things ascending the stairs. Warping analogue synths bleed through the static crackle of a scarred and ragged bassline, distorted beyond the realms of this reality, conjuring Lovecraftian nightmares in its ability to unsettle and disorientate. Bailey’s vocals are a mix of yelps and howls becoming strained and haunted, sounding as if channelled through a terrifying EVP session.

Other tracks, “Sacrifice”, “False Priest” and “Untrue” are cut from the same charred cloth. They are songs of possession, of malevolence, a place of ravens and dust.

Industrial beats and phasing synth-lines exorcise the demons of a convulsive electro-netherworld. Every sound, each utterance is positively charged, creating a disquieting, disturbing mesh of effects-laden doom-punk.

A trapdoor to the lower echelons of Dante’s nine circles of hell has been prised open and spewed out into a disco for the damned. If The Black Knight Satellite was beaming music to Earth then this is what it would sound like.

Untrue is released on October 16th.